Boston-based startup StreetScan has developed vehicle-mounted sensors that inspect road pavement to provide empirically based surface and subsurface assessments for use by municipal road maintenance operations.

StreetScan vehicles carry out the monitoring in the normal flow of traffic and afterwards deliver a pavement condition map through a web application that provides detailed road condition data to assist decision makers in maintaining and improving their road network. 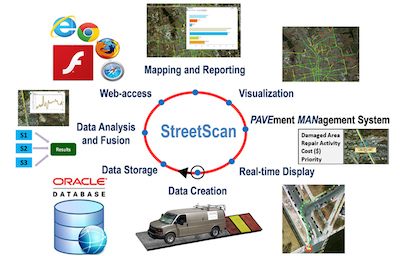 Diagram of the StreetScan road-monitoring process. Image credit: StreetScan. Many cities allocate their maintenance budgets based on pavement condition surveys that rely on surface observations carried out by inspectors. According to StreetScan, these can be costly, time consuming and intrusive on the traveling public.

· Video camera is used to capture surface defects for verification of results from the other sensors, analyzing cracks for their type and severity.

In its first year of operation, StreetScan has already mapped hundreds of miles of roads using its sensor technology for municipalities around Massachusetts, including Beverly, Littleton and Newton.

By posting a comment you confirm that you have read and accept our Posting Rules and Terms of Use.
Advertisement
RELATED ARTICLES
Bad Roads Can Cost You Money
April brings showers – and pothole repairs
Going Beyond the Surface of Asphalt Pavement
University of Liverpool spinoff to automate road maintenance
Piezoelectric Sensors Could Generate Energy on Texas Roads
Advertisement