Pioneering In-Human Use of Surgical Robot

One of the first in-human uses of a miniaturized robotically assisted surgical device developed by Virtual Incision Corp. was completed in Asunción, Paraguay, as part of the safety and feasibility trial for the technology. The robotic tool is designed for colon resection procedures. 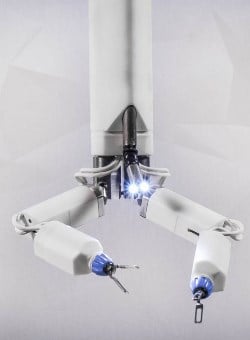 Mini surgical robot is inserted into the abdomen. Image source: Virtual IncisionThe self-contained surgical platform (see video) is inserted through a single midline umbilical incision in the patient’s abdomen and uses existing tools and techniques familiar to surgeons. The robotic system does not require a dedicated operating room or specialized infrastructure, and is expected to be less expensive than existing robotic alternatives for laparoscopic surgery due to its smaller size. Virtual Incision’s technology may enable a minimally invasive approach to surgeries performed today with a relatively large open incision.

John Murphy, CEO, Virtual Incision, says that the “positive completion of this feasibility study is a key milestone and a great foundation to build upon as we work toward FDA 510(k) clearance for the system in the United States.”

By posting a comment you confirm that you have read and accept our Posting Rules and Terms of Use.
Advertisement
RELATED ARTICLES
Video: Kidney transplant via single incision robotic surgery
Origami-Inspired Surgical Devices
Wearable Robotic Tools for Minimally-invasive Surgery
Hospital Features a Robotic Surgery Center
Pacemaker Size Shrinks for Use in Infants
Advertisement