Morocco has launched the first phase of what upon completion will be one of the largest concentrated solar power (CSP) plants in the world—capable of producing enough energy for more than one million Moroccan households.

The 160-megawatt (MW) Noor 1 is the first of three plants that will comprise the 500-MW Noor-Ouarzazate CSP complex, located in south-central Morocco on the edge of the Sahara Desert. It is estimated that, when fully operational, the three plants together will reduce the country’s energy dependence by approximately two and half million tons of oil annually, while also lowering carbon emissions by 760,000 tons per year. 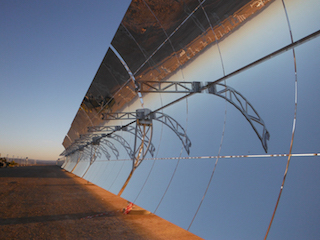 According to Morocco's Solar GCC Alliance, the country faces two major energy issues: energy independence (the country is dependent on outside sources for 97% of its energy supply) and growing demand (6% to 8% annual increase in demand for electric energy since 1998). Solar power in Morocco is enabled by one of the highest rates of solar insolation of any country—about 3,000 hours per year of sunshine.

Beyond Morocco, CSP is believed to have considerable potential across North Africa and the Middle East, both regions with abundant solar resources. The International Energy Agency estimates that up to 11% of the world’s electricity generation in 2050 could come from CSP.

Despite that potential, relatively high costs, when compared to fossil fuel alternatives, can be a deterrent to utilities investing in the technology. In the case of the Noor-Ouarzazate complex, concessional and public financing were key to lifting the project off the ground. The Moroccan Agency for Solar Energy secured over $3 billion needed for the Noor-Ouarzazate complex from the African Development Bank, the Climate Investment Funds, the World Bank, and European financing institutions.

The Noor-Ouarzazate CSP complex is expected to be fully operational in 2018, by which time it will meet approximately 18% of Morocco’s annual electricity requirements.