Stretching the utility of strain sensors for medical and industrial use

A stretchable strain sensor engineered at North Carolina State University offers an unprecedented combination of sensitivity and range, allowing it to detect minute changes in strain, or material deformation, with a greater range of motion than previous technologies.

The device, which tracks strain by measuring changes in electrical resistance, consists of a silver nanowire network embedded in an elastic polymer. The polymer features a pattern of parallel cuts of uniform depth in the polymer alternates from either side of the material in a design affording a greater range of deformation 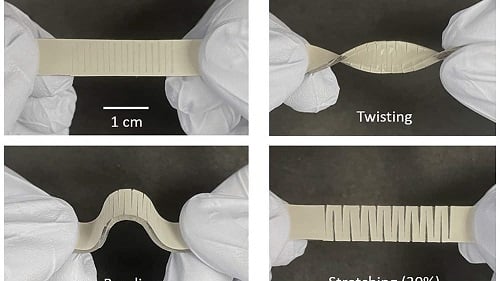 As explained in ACS Applied Materials & Interfaces, placement of the cuts perpendicular to the direction in which the sensor is stretched allows the device to deform significantly. The surface cuts pull open to create a zigzag pattern so that, the material can withstand substantial deformation without reaching the breaking point. Second, when the cuts pull open, this forces the electrical signal to travel further, traveling up and down the zigzag.

The strain sensor was incorporated into wearable blood pressure devices, a wearable system for monitoring motion in a user’s back, and a 3D touch controller as a human-machine interface.

By posting a comment you confirm that you have read and accept our Posting Rules and Terms of Use.
Advertisement
RELATED ARTICLES
Sensor Technology Tunes Out the White Noise
Stanford University wearable device measures changing size of tumors
How to Perform Tensile Testing on Polymers
Printable Lightweight Thermal Sensor Developed
Army Has Developed a New Material for Soldier Protection Systems
Advertisement