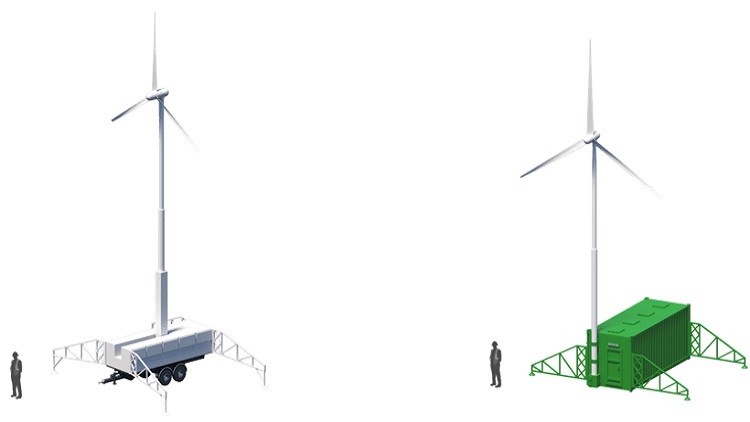 To speed setup, deployable wind turbines could use their shipping containers as a foundation. Source: U.S. National Renewable Energy Laboratory

The four-year Defense and Disaster Deployable Turbine project (D3T) funded by the U.S. Department of Energy (DOE) has come to an end. During the initiative, researchers from DOE national laboratories examined how to build a wind turbine that could serve both military and humanitarian missions around the world.

Military or aid organizations responding to hurricanes, earthquakes or armed conflicts require a reliable source of energy that can be assembled and operational as quickly as possible. Some missions use portable solar panels or diesel generators, but the former is dependent on adequate solar radiation conditions and the latter requires steady shipments of liquid fuel. Wind energy could be a reliable source of power for many of these missions, especially as part of a microgrid alongside solar panels and energy storage systems.

As traditional wind turbines are not easy to transport and install, the D3T engineers sought to define new design parameters for a wind turbine that could be broken down to fit in a standard military shipping container and be easily erected. Because both the military and the American Red Cross prefer 20 ft shipping containers, the researchers determined that this standard size could fit a 20 kW turbine, modified to assemble and disassemble quickly. To speed setup, deployable wind turbines could use their shipping containers as a foundation. These units can also host solar panels and batteries and could serve as a base for a portable microgrid.