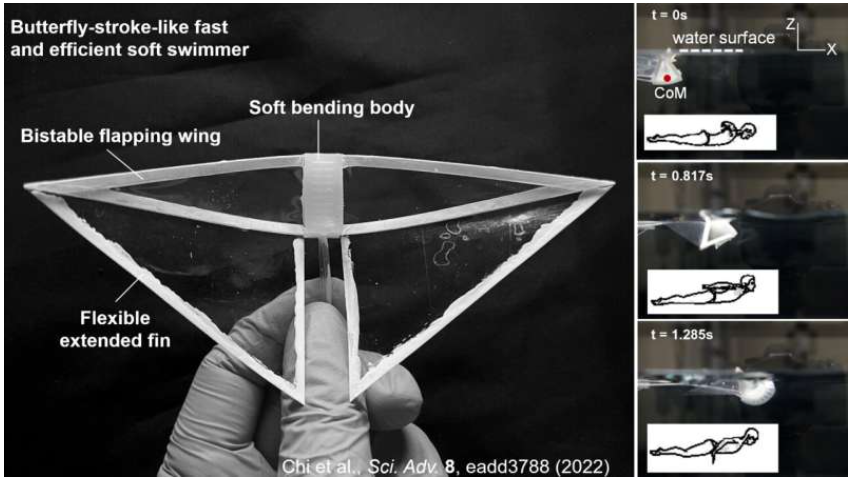 Inspired by the biomechanics of the manta ray, researchers at North Carolina State University have developed an energy-efficient soft robot that can swim more than four times faster than previous swimming soft robots. The robots are called “butterfly bots,” because their swimming motion resembles the way a person’s arms move when they are swimming the butterfly stroke. Source: Jie Yin, North Carolina State University

Current iterations of swimming robots reportedly achieve speeds of one body length per second. However, the Butterfly Bot built for speed achieved speeds of 3.74 body lengths per second, according to its developers.

To achieve these speeds, the Butterfly Bots derive power from their bistable wings, which means that the wings have two stable states. For example, the wing is stable until energy is applied. When that energy reaches a critical point, the wing will snap, much like a snap hair clip, into a different but similarly stable shape.

Further, the bistable wings of the butterfly bots are attached to the robots’ soft, silicone bodies. Operators pump air into the chambers inside the soft body of the bots to control the switch between the wings’ two stable states, thereby forcing the body to bend up and down and, consequently, causing the wings to snap back and forth by inflating and deflating the chambers.

"Most previous attempts to develop flapping robots have focused on using motors to provide power directly to the wings," the researchers explained. "Our approach uses bistable wings that are passively driven by moving the central body. This is an important distinction, because it allows for a simplified design, which lowers the weight."

For more information on the Butterfly Bots, watch the accompanying video that appears courtesy of North Carolina State University.

By posting a comment you confirm that you have read and accept our Posting Rules and Terms of Use.
Advertisement
RELATED ARTICLES
Watch: Dragonfly shaped soft robot can skim water to detect pollution
Transmitting Energy Efficiently Through Soft Materials
Team develops line of soft robots inspired by the cheetah
Watch: Solar-powered wings flap faster than a butterfly
Watch: Biocompatible microbots morph shape in blood vessels and fluids
Advertisement