RobotFalcon to take flight at an airport near you

Marie Donlon | October 31, 2022
A robot designed to scare off flocks of birds surrounding airports and posing a hazard to aircraft has been developed by a team of researchers from the University of Groningen, the University of Tuscia, Roflight, Lemselobrink and the Royal Netherlands Air Force.

The aptly named RobotFalcon is a remote-controlled flying robot designed to resemble the peregrine falcon, a predator that hunts and kills other birds. 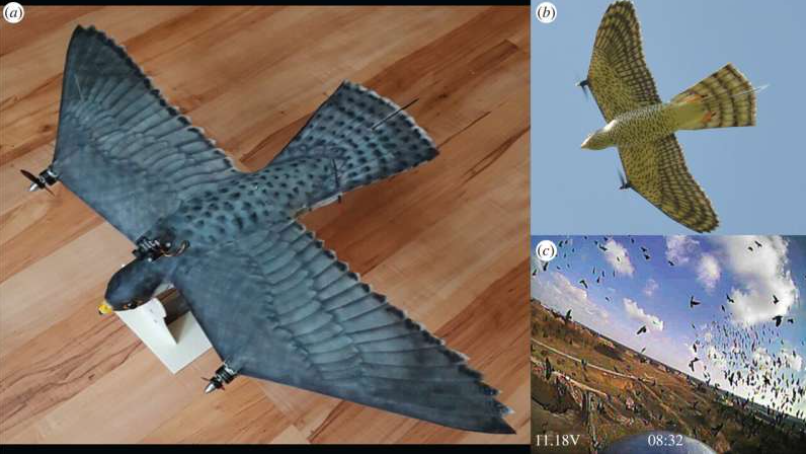 The RobotFalcon, which is composed of fiberglass and polypropylene and painted to closely resemble the predator bird, is powered by an internal engine that drives two propellers located on the front of each of the robot’s wings. This enables the RobotFalcon to mimic the flying patterns of an actual falcon, according to its developers.

For three months, the RobotFalcon has undergone field tests where the researchers announced that the robot successfully frightened entire flocks of birds within five minutes of arrival and in some instances, clearing the field within 70 seconds.

This technology is in development with the aim of driving away flocks of birds from airports where birds pose a considerable threat to aircraft. Bird strikes can significantly damage aircraft and, in extreme instances, possibly result in fatalities.

The article detailing the robot, Deterrence of birds with an artificial predator, the RobotFalcon, appears in the Journal of The Royal Society Interface.

By posting a comment you confirm that you have read and accept our Posting Rules and Terms of Use.
Advertisement
RELATED ARTICLES
Video: Aerial Scarecrow Improves Aviation Safety
Robot Falcon Chases Birds Away from Airports
Sonic Net Could Repel Birds from Airfields
Video: Shell unveils a car that can get 107 mpg. A robot falcon chases away birds at an airport. You soon may be 3D-printing your own clothes!
The Avian Diversity Cost of Hydropower Development
Advertisement