FPT Industrial has inaugurated its new ePowertrain plant in Turin, Italy. The carbon-neutral site is dedicated to the production of electric axles for heavy commercial vehicles (HCVs), electric central drives, and to the assembly of battery packs for light commercial vehicles and buses.

The facility is the first totally carbon-neutral Iveco Group plant, achieving its targets by offsetting its carbon dioxide emissions with the purchase of energy from renewable sources and carbon credits. In addition, the plant generates energy with solar panels installed on the façade and with innovative technologies, such as a mini-wind tower. 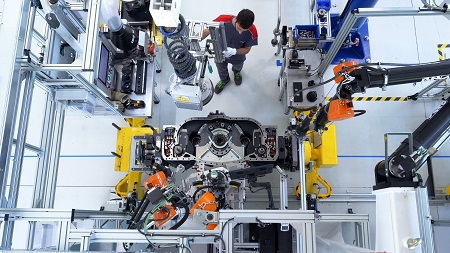 Industry 4.0 technologies have been adopted across all areas to enable the automatic collection and analysis of all data essential to monitor and improve safety, quality and productivity. All production processes are based on highly automated warehouses for the management of components, and developed through electronically controlled assembly stations.

Next-generation technologies adopted include augmented and virtual reality, reducing the design time for production lines by simulating operational outcomes before physical installation; 3D printing and “Smart Observer” systems based on intelligent sensors; 3D scanners for metrology-grade measurements; 3D reality simulators and cooperative robots. These robots, together with automated guided vehicles, greatly improve ergonomics and safety, and make the operators’ job easier and less stressful. Cloud quality checks allow instant detection of problems, while end-of-line checks certify the conformity of the product both in terms of configuration, performance and safety.

On the HCV electric axles line, a station with light signals supports the operator by clearly indicating which component is to be selected and where to mount it, thus helping achieve the zero-error target. On the battery assembly line, dielectric carpets protect operators against possible electric dispersions, while thermal imaging cameras automatically measure battery temperatures, immediately reporting any deviation from the norm.

By posting a comment you confirm that you have read and accept our Posting Rules and Terms of Use.
Advertisement
RELATED ARTICLES
From vision to reality: FPT Industrial reveals its energy transition strategy at IAA Transportation 2022
Toyota to assemble fuel cell modules at Kentucky plant in 2023
FPT Industrial brings farmers’ dreams of energy independence to World Biogas Expo 2022
Two roads, one direction. FPT Industrial’s journey to net zero carbon at IAA Transportation 2022
FPT Industrial powers the world’s first snow groomer with a hydrogen combustion engine, the new XC13
Advertisement