Scientists at Japan’s Osaka University have developed edible tags, or QR codes, that are embedded within food that reveal information about the food such as its ingredients and its source.

Using a method called “interiqr” a tag is embedded within 3D printed food without changing its outward appearance or taste and without having to destroy the food in order to scan the QR code. The Osaka University team used the method on 3D printed cookies to demonstrate the technology. 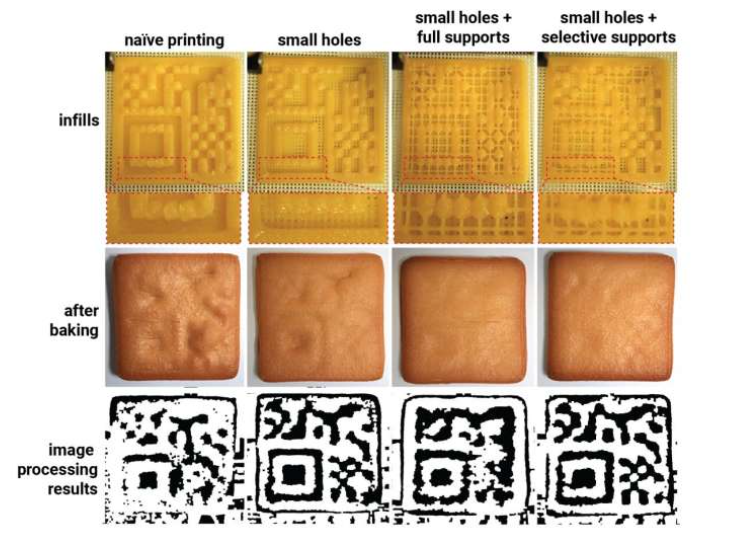 "Many foods can now be produced using 3D printers," explained Yamato Miyatake, lead author of the study. "We realized that the insides of edible objects such as cookies could be printed to contain patterns of empty spaces so that, when you shine a light from behind the cookie, a QR code becomes visible and can be read using a cellphone."

According to the Osaka University team, the QR code used in the experiments was composed of the cookie itself, thereby eliminating any issues with taste or appearance. Further, the researchers demonstrated that the information from the QR code could be made visible to everyone along the food supply chain — manufacturers, retailers, consumers — using a simple backlight.

The researchers suggest that the technology could potentially reduce food and packaging waste and possibly improve food safety and traceability.

The article that details the technology, interiqr: Unobtrusive Edible Tags using Food 3D Printing, appears in the journal Proceedings of the ACM Symposium on User Interface Software and Technology (UIST).

More information about the technology is available in the accompanying video, which appears courtesy of Osaka University.

By posting a comment you confirm that you have read and accept our Posting Rules and Terms of Use.
Advertisement
RELATED ARTICLES
Edible QR codes can be used as anti-counterfeiting tool
Cryogenic Freezing Helps to Speed Cookie Production
Edible cement the future of construction?
Watch how a 3D printer turns food waste into edible creations
Edible bioprinting may thwart counterfeit meds
Advertisement