FPT Industrial, the powertrain brand of Iveco Group, goes straight ahead on alternative propulsion and takes to the ski slopes. Just a week after the launch at IAA Transportation 2022 in Hannover, Germany, FPT Industrial presents the first concept application of the new XC13 hydrogen combustion engine and a new collaboration with PRINOTH, a developer of snow groomers and tracked vehicles. 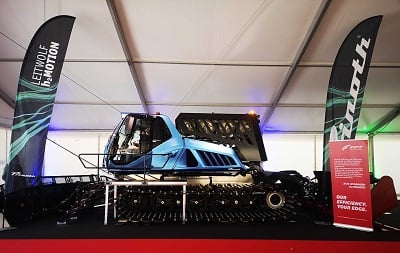 The new FPT XC13 is the first multi-fuel single-base engine. From diesel to natural gas — including biomethane — hydrogen, and renewable fuels, the base engine has been designed with multiple versions to offer maximum component standardization and easy integration into the final product. The hydrogen fuel is stored in five tanks mounted on the back of the machine for an indicative running time of more than three hours.

Designed primarily for preparing slopes in larger ski resorts due to its power and size, the new concept vehicle is another step toward PRINOTH’s goal of a fully carbon neutral fleet and the collaboration with FPT Industrial signals the two companies’ mutual commitment to sustainability in off-road applications.