One of the primary differences between chemistry and chemical engineering is the sheer volume of chemical products. While a chemist may make 200 ml of a substance in a beaker, and may notice the beaker gets a little warm, the chemical engineer has to figure out how to safely make 2,000 gal/hr of the same substance while managing the many joules of waste heat generated. The answer is not to get more beakers, but to scale up safely and efficiently. Chemical engineers tend to deal in rates rather than amounts, and with both transient and steady-state processes.

When working with flow rates of chemicals, the chemical engineer must learn to manage chemical storage, as even the most optimized reaction with the best-in-industry, Just-in-Time (JIT) manufacturing techniques will require chemical storage along the way. Chemical storage can be used for raw materials, finished products, waste streams waiting for disposal or mid-process products. 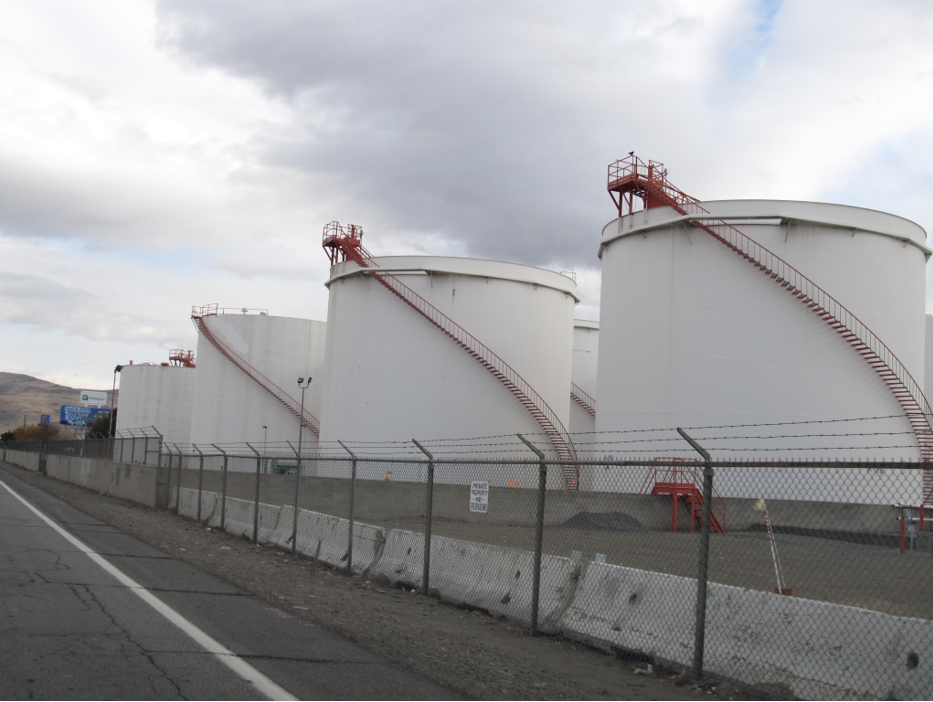 What is a tank farm?

Outdoor tank farms are a common form of chemical storage. These are found at almost every chemical processing facility, polymers factory, refinery and so on. Typically, tank farms feature large diameter, cylindrical tanks for liquids or spherical tanks for gas storage. The spherical tank has the most efficient volume to surface area ratio, but cylindrical tanks are easier to build, especially considering the weight of the liquid that will be placed in them.

No assumption is safe with tank farms. Ideally, chemicals stored in tanks will be pure, in a single phase and homogeneously mixed. However, one can quickly see that tanks will often contain contaminants, be in both liquid and vapor states, and can separate or be otherwise heterogeneous. This is particularly true for water separating out and potentially freezing in cold weather.

Tank farms are outdoor installations, exposed to all of the elements. This means the geography of the facility is an important consideration when evaluating possible hazards. A tank in North Dakota will face frequent freezing conditions versus a tank in southern Florida, which may face hurricane-strength winds and flooding. Diurnal heating will cause the temperature to rise, leading to more vapor and potentially increasing the pressure of the tank. Likewise, cold weather can cause freezing, or can cause the pressure to drop in the tank. They must be protected for both.

Perhaps the most obvious threat to a tank farm is a leak. Regardless of what chemical is being produced, it is expected to remain in the tank, and not escape as a liquid from the bottom of the tank or as a vapor from the top of the tank. This is especially important for flammable or toxic chemicals.

In order to prevent leaks, tanks must be routinely inspected. This can mean visual inspection as well as ultrasonic inspection, looking for cracks or corrosion. Tanks are coated both inside and out, with substances to inhibit corrosion, though any pinhole in the coating will be a site of rapid corrosion. Penetrations in the tanks will always be a problem spot to check; places where sensors, valves and plumbing enter the tank, as they are often made from different metals and may set up a galvanic corrosion loop.

Besides prevention techniques, tank farms have several mitigative features as well. Tanks are placed behind earthen dikes, often lined with plastic. If the tank leaks, the dike will hold two times the volume of the tank, and the plastic layers under the soil will prevent it from seeping into the ground. Leaks can be detected by placing leak cables in these dikes, as well as monitoring the volume of the tank and looking for anomalies.

Because tanks often contain flammables or reactive chemicals, there needs to be controls to stop a fire or limit a reaction. For flammables, valves can be closed to limit the flammable substance from continuing to flow into or out of the tank. These control valves must be chosen carefully, both in style and location. The design should include whether to have fail open or fail closed types, whether multiple valves should be stacked in series or parallel and so on. Their location must not isolate other protective measures, such as pressure relief valves.

Most tank systems have some sort of blanket gas or fire retardant foam that can be released to smother fires in the tank farm. These can be operated automatically using heat sensors. Smoke detectors can be used in conjunction with the heat sensors, but the fast response and early detection of the heat sensors should be the primary triggering mechanism.

For polymerization reactions that can run away, valves from the reactants should be closed. For an even safer system, certain polymers can be injected into the system that will preferentially bond with the main reactant, but slow its reaction rate. In this case, the product will be scrap, but it will prevent rapid, uncontrollable polymerization.

For flammable substances, one of the biggest hazards is static discharge. Tanks should be grounded, both for static and for lightning strikes. Furthermore, all parts must be grounded together. The Barton Solvents plant in Kansas did not have a level float grounded properly, leading to a spark that caused the tank to explode back in 2007.

The static hazard doesn’t end there, however. If a tank is being filled with water, water is a conductor and one may not pay much attention to static hazard, as the falling water will not build up much of a static charge. Instead, consider a chemical that is flammable, but not a good conductor of electricity. Now, falling liquid is building a static charge.

To prevent this, tanks are designed to fill from the bottom up, where the feed pipe remains in contact with the tank wall. This limits the static buildup, as it will more quickly ground the charges against the tank wall. Near the top of this filling tube, there should be a small weep hole. While some droplets will leak through this hole, this is an anti-siphoning feature. If the feed pump fails, the liquid stops flowing, but the vacuum is broken by this hole. This keeps the tank from emptying backwards through the feed pump.

There are efforts to reduce the amount of chemical storage on-site. The benefits of this thought process are to reduce the hazards associated with the storage as well as reduce the footprint (and thus improve the economics) of the plant. However, the recent supply-line shortages in virtually all industries have led to a resurgence in adding storage capacity of raw materials to prevent plants from idling. Currently, most industries are trying to straddle the fine line between excess, potentially spoiling or hazardous chemical storage and having enough to prevent idle plants. In any event, chemical storage onsite is never going away entirely.

By posting a comment you confirm that you have read and accept our Posting Rules and Terms of Use.
Advertisement
RELATED ARTICLES
U.S. Safety Board Calls for Upgrades to Oil Tank Cars
ATOM fuel storage explosion prevention system protects lives, property and the environment
Immersion Heaters That Keep Fluids Flowing All Winter
Lax Maintenance Led to 2017 Railroad Accident in Iowa
Undetected hydrogen gas is suspected in fatal plant explosion
Advertisement