Researchers from Tongji University in China have developed a new mask that can detect respiratory viruses — influenza and the coronavirus, for instance — in droplets or aerosols in the air surrounding the wearer and alert the wearer via smart phone of the exposure within 10 minutes.

According to its developers, the mask and its accompanying sensor are designed to quickly detect the presence of respiratory pathogens responsible for COVID-19 and H1N1 influenza, among others, that are spread via small droplets and aerosols released by infected people when they are talking, coughing and sneezing and that linger in the air. 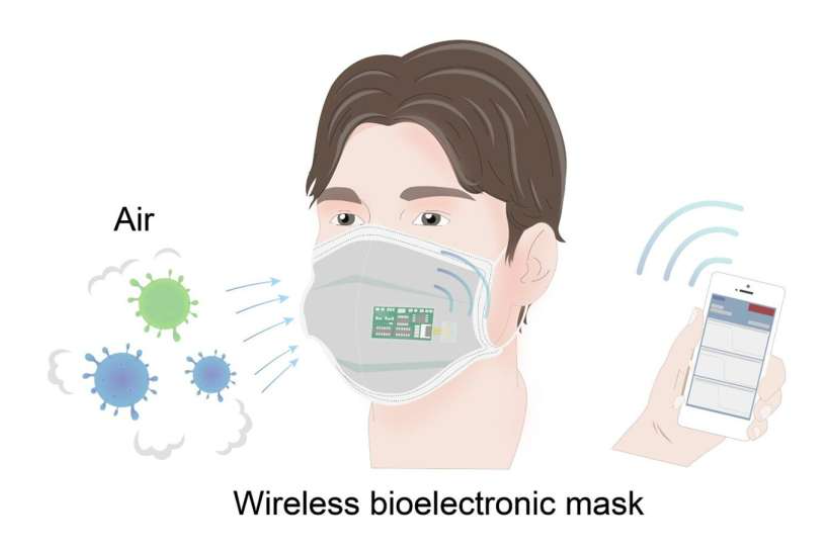 In the lab, the researchers tested the mask in an enclosed chamber, spraying the viral surface protein containing trace-level liquid and aerosols onto the mask. The mask’s sensor reacted to just 0.3 microliters of liquid containing viral proteins — this is roughly 70 to 560 times less than the volume of liquid created in one sneeze and significantly less than the volume generated from coughing or talking, the researchers suggest.

The sensor that enables the mask to detect common respiratory viruses was designed along with aptamers — a type of synthetic molecule that identifies unique proteins of pathogens such as antibodies. As part of their design, the team modified its multi-channel sensor with three types of aptamers — all of which can simultaneously identify surface proteins on SARS-CoV-2, H5N1 and H1N1.

Further, after the aptamers bind to the target proteins in the air, the connected ion-gated transistor amplifies the signal and subsequently alerts the wearers.

"Our mask would work really well in spaces with poor ventilation, such as elevators or enclosed rooms, where the risk of getting infected is high," the researchers suggest.

Currently, the team is working to shorten the detection time and to increase the sensitivity of the sensor.

The article detailing the mask, Wearable Bioelectronic Masks for Wireless Detection of Respiratory Infectious Diseases by Gaseous Media, appears in the journal Matter.

By posting a comment you confirm that you have read and accept our Posting Rules and Terms of Use.
Advertisement
RELATED ARTICLES
New mask features fans, HEPA filters
Arming Surgical Masks to Kill Viruses
New mask can diagnose wearers with COVID-19
Solutions to global mask, face shield shortages emerge from COVID-19 pandemic
Team is developing face mask that emits fluorescent signal when it encounters COVID-19
Advertisement