For the second consecutive year, FPT Industrial took a leading role at the Grape Harvest Festival held on September 10 in the evocative setting of the Fontanafredda wine estate in Serralunga d’Alba in Italy’s Piedmont region. The event included guided visits, tastings of dishes cooked by Michelin-starred chefs, concerts and the traditional crushing of the grapes.

As in 2021, FPT Industrial’s presence at this important event was primarily focused on sustainability. Thanks to the brand’s partnership, a tour of the estate on electric bicycles was conducted, allowing numerous participants to visit the ancient buildings, the historic winery and above all the vines in a completely 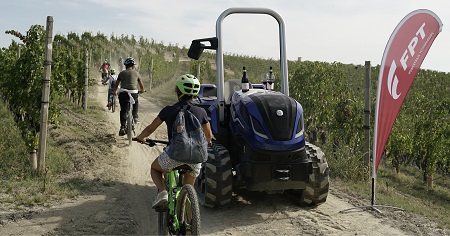 One of the highlights of the tour was the cru Vigna La Rosa, whose Barolo wine features in Wine Spectator’s Top 100. Here, for the second year, the precious Nebbiolo grapes are grown and harvested with the aid of a New Holland TK Methane Power crawler tractor with biomethane-fueled FPT Industrial F28 natural gas engine, and thus with net-zero carbon footprint, since it is powered not by fossil fuel but by methane derived from the anaerobic digestion of agricultural waste.

The participants in the two e-bike tour sessions were able to admire the biomethane-powered crawler tractor with its FPT Industrial engine at first hand, and obtain all information on the harvest directly from Fontanafredda’s agronomist and from an FPT Industrial specialist. The sponsorship of the e-bike tour and the biomethane-powered tractor show how the topic of sustainable mobility, in its various guises, is consistently the primary focus of FPT Industrial’s efforts.

At the brand’s stand set up on the estate for the event, all participants of the e-bike tours were also able to view the biomethane-powered F28 natural gas engine and taste the Barolo Cru Vigna La Rosa wine.

Launched in February 2021, the three-year partnership between FPT Industrial, producer of low environmental impact engines, and Fontanafredda, the historic winery founded by the first King of Italy in 1858, which currently has 120 hectares of certified organic vineyards, forms part of the Green Renaissance project launched to promote best-practice grape cultivation with reduced environmental impact. The partnership is supported by the Piedmont Region’s Tobias Project with contributions from New Holland Agriculture, CNH Industrial and local businesses.