University of California, Davis — UC Davis for short — is awarding two faculty members for their groundbreaking contributions to medical research in their respective departments.

Priya Shah, whose involvement spans numerous bioengineering-focused departments at UC Davis, is being awarded $40,000 for her project titled, "Common Features of Arbovirus-Host Protein Interactions" after investigating arbovirus replication for the purpose of therapeutic advances.

"Viruses use physical interactions with host proteins to co-opt their functions for replication," she noted in her abstract. “Compared to a virus like SARS-CoV-2, in which most transmission is now human-to-human, arboviruses have to cycle between two very different species."

Shah explained that arboviruses, or viruses that are transmitted by arthropods like mosquitoes or ticks, require transmission between very biologically different species to replicate. "This raises the fundamental question: how do arboviruses physically hijack cellular processes to facilitate the same basic process of viral replication in two very different hosts?”

The study focuses on how arboviruses move and thrive between such different species using the same viral plan of attack. Proteomics allows researchers to study proteins simultaneously and investigate the possibility for therapeutic benefit, ultimately hindering viral replication. 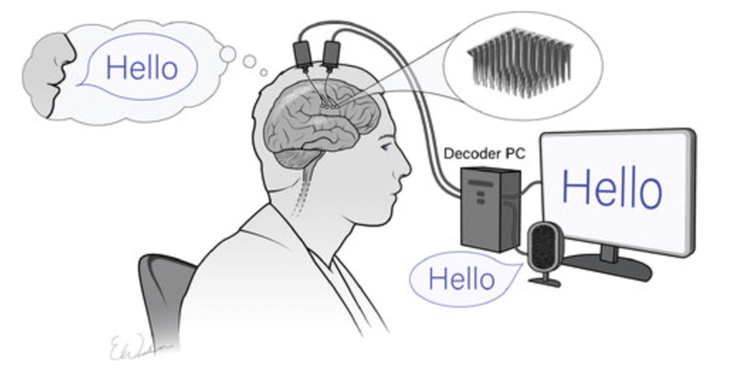 The focus of BrainGate is to use this technology to “turn thoughts into action” for people living with paralysis. Source: UC Davis

Another notable figure, Sergey Stavisky, joined the Department of Neurological Surgery in the School of Medicine in 2021 after studying at Stanford and Brown University. Stavisky is the scientific lead on a UC Davis Health clinical trial involving stimulating implants. The team explained that these implants can hopefully be used to encourage and eventually restore speech to people who have lost the ability due to neurologically damaging conditions.

His project, titled, “Restoring Lost Speech Using an Intracortical Brain-Computer Interface" aims to unveil how he is advancing the electronic device trial called BrainGate2 to measure brain activity during a speech attempt, precisely and instantaneously "decode" that brain activity, and provide that output to a computer in a communicative form.

“People who lose the ability to speak from conditions including ALS and stroke have an urgent and unmet need to restore their ability to communicate.” Stavisky wrote. His project is also being awarded $40,000 for recognition and further development. Read the full report on BrainGate2 including eligibility criteria.

By posting a comment you confirm that you have read and accept our Posting Rules and Terms of Use.
Advertisement
RELATED ARTICLES
New Sieve Sorts Molecules by Chirality
Electrodes Used to Record Brain Waves and Convert Them to Text
Immunogene Therapy for Lung Cancer Patients
Brain Implant Unlocks Speech for ALS Patient
Insurance May Be Best Safety Net for World's Poor in the Face of Climate Change
Advertisement