Certain alloys, including steel and stainless steel alloys, can be precipitation hardened, meaning an additional heat treatment is applied post-solidification that hardens and strengthens the metal. The idea behind precipitation hardening is that the heat treatment causes many small particles to drop out of the solid solution of the bulk material. These precipitates act as blocks for dislocation movement, which make the material both stronger (resistant to deformation) and harder (resistant to indentation). 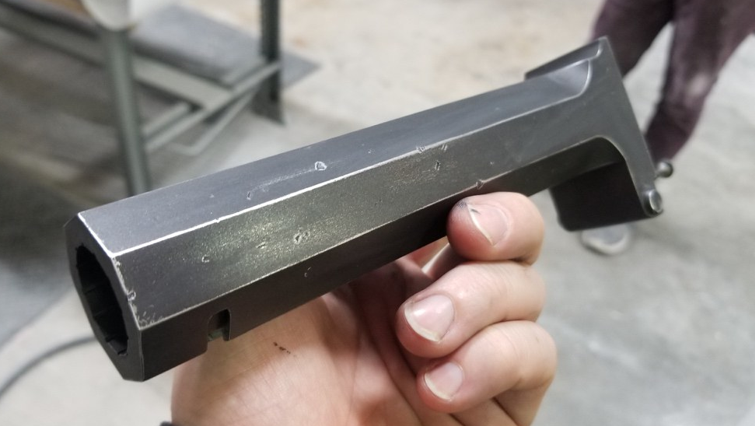 What is precipitation hardening?

In high school science class, there is a common, canned experiment where a saturated salt water solution is allowed to sit for an extended period of time. During that time, water evaporates out of the open container, causing salt crystals to precipitate out, piling up at the bottom. Basically, as the volume of the water decreases, the remaining water becomes oversaturated with salt, causing this precipitation process.

Precipitation hardening processes are similar in principle, though these processes occur in the solid state. Very small particles of an impurity phase precipitate out of the solid solution because the solubility limit of the impurity in the bulk material has been exceeded.

In terms of a heat treating process, precipitation hardening occurs over the bulk material. This has some distinct advantages over carburizing (case-hardening), nitriding and work hardening (from shot peening, for example) that are largely a surface effect. This means thicker parts can be precipitation hardened, whereas carburizing these parts all the way through would be cost prohibitive and technically difficult.

Which alloys are hardenable through a precipitation process?

Not all alloys can be hardened through precipitation hardening. They must be of a composition that can be heated to form a single phase, quenched to preserve that single phase, and then reheated to allow grains of a secondary phase to grow.

Consider the phase diagram below. The composition marked by the crossing of the vertical red line to the x-axis is a precipitation hardenable alloy, provided it can be quenched quickly enough to preserve the alpha phase upon cooling. 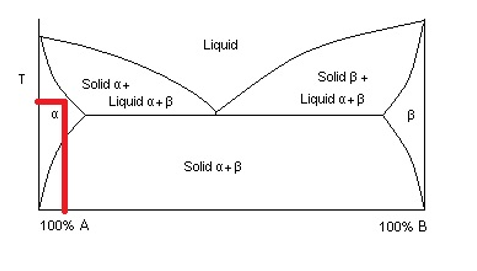 Binary phase diagram. The horizontal red line marks the initial heating temperature that should be used for the composition marked by the vertical red line. Source: Bantman/CC BY-SA 3.0; modified by author

While the most commonly discussed precipitation-hardened alloys are often aluminum and magnesium alloys, it is possible to precipitation harden certain steels and stainless steels.

There are three steps to precipitation hardening, referred to as solution annealing, quenching and aging.

The solution annealing process begins by heating the alloy to its single-phase region. This heating temperature will depend on the composition of the alloy and its associated phase diagram. This step allows the alloy to homogenize, improving uniformity throughout.

After allowing time for the impurity atoms to spread throughout and form nucleation sites, the material is quickly quenched. If the quench is not rapid enough, the material will form into two phases (alpha and beta), which is not desirable. Instead, there should be an alpha matrix with very tiny (perhaps individual atoms or clusters of atoms) beta nucleation sites. To know how fast this material must be quenched, engineers should consult (or develop) a cooling curve for this particular alloy.

Once the alloy has been quenched, it needs to be “aged.” Aging is the act of heating the alloy below the solvus line and soaking it at that temperature for a specific amount of time. The solvus line divides the alpha phase region and alpha plus beta phase region. The temperature is not hot enough to convert the part back into the alpha phase, but is high enough to promote diffusion of beta phase growth at the nucleation sites.

Aging should be performed at the temperature shown by where the horizontal blue line meets the y-axis. Source: Bantman/CC BY-SA 3.0; modified by author

In order to harden an alloy with precipitates, one must consider two problems: how to get the nucleation sites of the precipitates, and how to grow the precipitates to grow to the proper size. The first is governed by kinetics, and the second by thermodynamics, though surface tension and other factors are important for both.

Kinetically speaking, the most favorable conditions for generating nucleation sites are to heat the part to just under the solubility-limiting temperature, as shown by the horizontal red line in the above phase diagram. In this case, there is maximum atomic movement, making it easier for the “impurity” atoms to spread out throughout the material. The driving force in the spreading of these atoms is diffusional; it is to reduce the concentration gradient of these particular particles. This ensures that nucleation sites are evenly distributed throughout the bulk material.

What is the driving force for beta phase growth? Insolubility. In the initial heating, the concentration gradient forces beta phase nucleation sites to spread evenly throughout the matrix. Below the solidus, any beta phase is trying to separate out from the alpha phase. This is also a surface tension effect as the surface tension is between the alpha and beta phases. When enough heat energy is applied, the material acts to reduce surface tension, and that means clustering up some of the beta phase.

Precipitation hardening is a balancing act. High temperatures are required, so any reduced heating time reduces overall costs. However, if adequate heating is not provided, precipitates will not grow to a large enough size to slow dislocation movement. If the dislocation movement is not slowed, strengthening will not occur. Inadequate heating can be due to a soak temperature that is too low, an aging time that is too short, or a combination of both.

Overaging is also a problem. If the precipitates are allowed to grow too large, they begin to detach from the matrix and start to look more like a two-phase alloy. This can be the result of aging for too much time. If the aging takes place at too high of a temperature, the alloy will convert entirely back to 100% alpha phase, just like the initial heating. However, unlike the initial heating, the alloy will likely not be quenched, and will be allowed to cool instead. This will definitely lead to a two-phase alloy. Even worse, sometimes this second phase can cluster up at grain boundaries, potentially making the alloy even weaker and more susceptible to intergranular cracking under load.

There have been several cases of this happening where people have welded trailer hitches, push bars, roll bars and customizations onto vehicles, only to have a precipitation-hardened part fail later.

Before deciding on a precipitation-hardened alloy, one should consult the phase diagram extensively. If the part will not see high temperatures during use but will benefit from increased strength, hardness and wear resistance, it might be a good choice. Because the bulk material is hardened nearly uniformly, it is better for larger parts and parts where chemical and mechanical surface treatments will be impossible or impractical.

By posting a comment you confirm that you have read and accept our Posting Rules and Terms of Use.
Advertisement
RELATED ARTICLES
Promising Future for New, Implantable Titanium Alloys
Leveraging Mini-mills for Superalloy Performance, Prototyping and Research
Better welding of aluminum: Strength and thermal stress
Finding the Optimal Metal Tubing for Medical and Critical Applications
Innovative spring wire induction temper lines
Advertisement