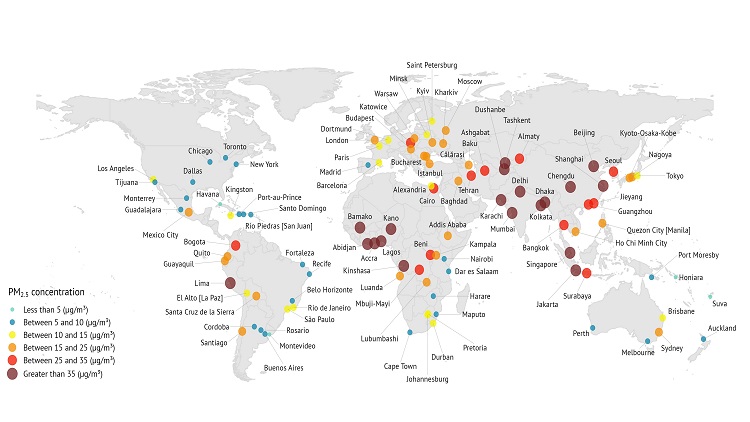 Population-weighted annual average pollutant concentrations in the five most populous cities in each region in 2019. Source: Health Effects Institute

The findings of a new report issued by the Health Effects Institute, an independent research organization, are not entirely unexpected: the world’s biggest cities and urban areas face some of the worst air quality on the planet.

The detailed analysis of air pollution and global health impacts for more than 7,000 cities around the world focuses on fine particulate matter (PM2.5) and nitrogen dioxide (NO2), based on data for the 2010 to 2019 period. In 2019, 1.7 million deaths linked to PM2.5 occurred in the 7,239 cities included in the analysis. Cities in Asia, Africa, and Eastern and Central Europe saw the greatest health impacts from particulate exposures.

In 2019, 86% of the cities included in the study exceeded the World Health Organization‘s 10 µg/m3 guideline for annual NO2 exposure, impacting about 2.6 billion people. While PM2.5 pollution tends to get more attention in known hotspots around the world, less data has been available for NO2 at this global scale.

Explore interactive maps to learn more about air quality in a given city, how it is changing and the disease burdens associated with air pollution.

By posting a comment you confirm that you have read and accept our Posting Rules and Terms of Use.
Advertisement
RELATED ARTICLES
Air Pollution May Lead to Sleepless Nights
92% of World Population Breathes Polluted Air
Traffic planning to reduce NO2 emissions in European cities
Study: Air quality at work may affect employee cognition, productivity
Video: A nexus observed between air pollution and the coronavirus
Advertisement