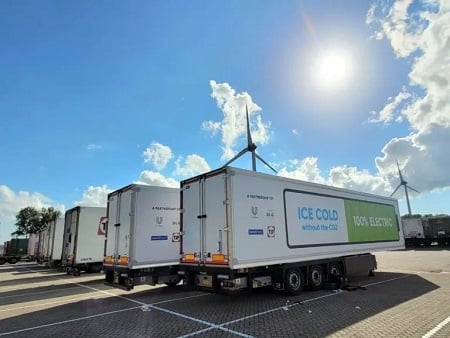 The pilot project launched in the second half of 2021 when the first two semi-trailers used to transport Ben & Jerry's ice-cream were equipped with Maxwell+spark’s Advantage.li system. The target was to save 80% of the diesel used in traditional refrigeration systems by replacing them with a battery that could draw from a green electric grid. Not only was this achieved, but current project data is said to show that the system reached more than a 99% savings of fossil fuel over the last few months.

The system provides cooling for up to 24 hours at -25° C and up to 36 hours at 0° C. Battery models of 40 kWh to +70 kWh are charged in one to three hours and include all-digital, triple layer over-charge and over-discharge protection.

As a result of the cost, fuel and emissions savings demonstrated, additional trucks have been fitted with this system and are now on the road.

By posting a comment you confirm that you have read and accept our Posting Rules and Terms of Use.
Advertisement
RELATED ARTICLES
First autonomous electric refrigerated trailer is ready for the road
The technical side of ice cream
Swiss Traction Battery Accelerates Electric Vehicle Development
Rayfrigeration: a Solar-Powered Transport Refrigeration Unit
Transport fleet transitions to lower GWP refrigerant
Advertisement