A pumped storage hydropower plant serving as a water battery is now operational in Switzerland. The 900 MW Nant de Drance power facility is expected to play a key role in stabilizing the Swiss and European electricity grids, according to operator Alpiq.

Located 600 m below ground in a cavern between the Emosson and Vieux Emosson reservoirs in the Finhaut municipality, the power plant hosts six pump-turbine units with a capacity of 150 MW each. The highly flexible machines make it possible to switch from pumping at full power to turbining at full power in less than 5 minutes. The upper reservoir of Vieux Emosson holds 25 million m3 of water, which represents a storage capacity of 20 million kWh.

The volume of water passing through the Nant de Drance turbines, 360 m3 a second, corresponds to the flow of the Rhône at Geneva in summer. 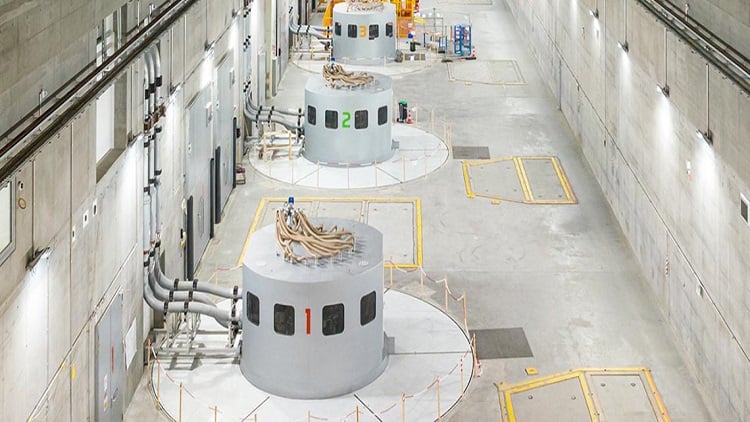 Nant de Drance works like a gigantic battery which allows excess electricity to be stored in a short term or to produce the necessary energy when demand exceeds production. When power production is high, excessive power is used to move water from the lower pool to the reservoir at a higher height, which is similar to charging a conventional battery. As power demand increases, the water at the higher level is released, passing through turbines to generate power and supply the grid.

The project took 14 years to complete and entailed excavation of 17 km of tunnels through the Alps. The Vieux Emosson dam located at 2,200 m altitude was raised by 21.5 m in order to double capacity of the reservoir and provide adequate storage capacity for the facility.