The cradle to grave assessment reported in the Journal of Cleaner Production focuses on the life cycle resource use of nuclear power generation for 1 kWh based on uranium fuel. Both open and closed fuel cycles were considered, as were open-pit mining, underground mining and in situ leaching approaches to uranium extraction. 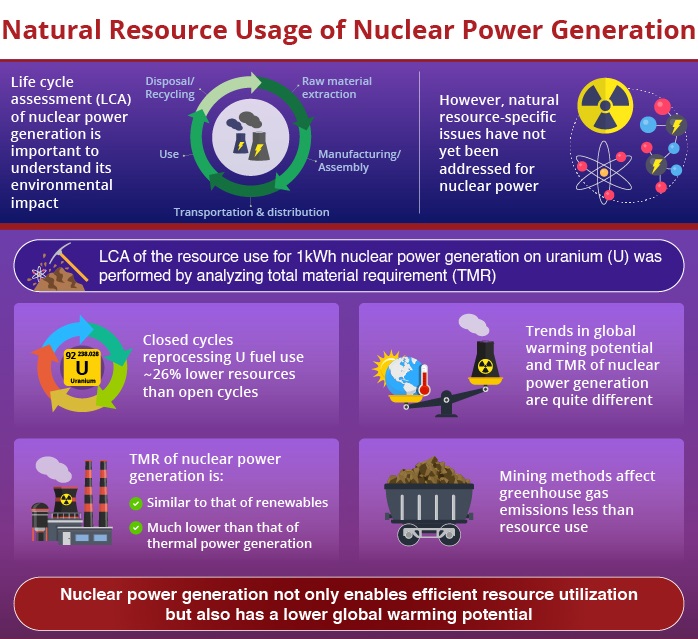 Mining intensity, expressed as the TMR coefficient, was highest for enriched uranium fuel, followed by nuclear fuel, reprocessed uranium fuel, mixed oxide fuel and yellow-cake. The grade of uranium ore was observed to have a large impact on the TMR coefficient, indicating that TMR varied significantly with different mining methods. In situ leaching had the lowest TMR. A closed cycle that reprocesses uranium fuel consumes 26% less resources than an open cycle that does not reuse its by-products.

Re: Weighing the resource life cycle of nuclear power
#1

As usual, they slid over the storage of nuclear waste.

Re: Weighing the resource life cycle of nuclear power
#2
In reply to #1
MNIce

That issue was indirectly addressed, even though it is not a topic of the article. Did you not see that the TMR of a reprocessing cycle is 26% less than than the one-and-done practice? That means reprocessing reduces the mass of waste (including ore tailings) by that much.

The problem of waste disposal, while not insignificant, is all too frequently greatly exaggerated. The ash produced in a year from a single 1 GW coal-fired plant is about double the volume of nuclear waste produced in the entire world since the first commercial power reactor came on line. In that coal ash there are 10-15 tons of toxic heavy metals, plus the mercury that was vaporized during combustion. The heavy metals are a far greater hazard because they are diffused throughout the ash pile and cannot be readily captured and sequestered or put to use like the components in spent nuclear fuel.

Thirty years ago it was observed that the greatest difficulty with nuclear waste disposal was the politics, not an engineering problem. That has not changed. Perhaps even the engineering issue will soon be simplified; the Chinese Institute of Modern Physics claims to have developed a practical means to transmute elements in nuclear waste: