Blood sample collection and other hospital procedures require healthcare staff to work in close proximity to patients. Increased protection from infectious agent exposure can be afforded to medical personnel with a desktop air curtain system (DACS) designed by researchers from Nagoya University, Japan.

The DACS blocks emitted aerosol particles and prevents the potential spread of viruses such as SARS-CoV-2, the causative agent of COVID-19, by means of a generator at the top that produces a steady airflow. The air stream is guided to a suction port at the bottom of the device, effectively creating a smooth curtain of air. This configuration reduces air disturbance and turbulence within the curtain, which can allow infected 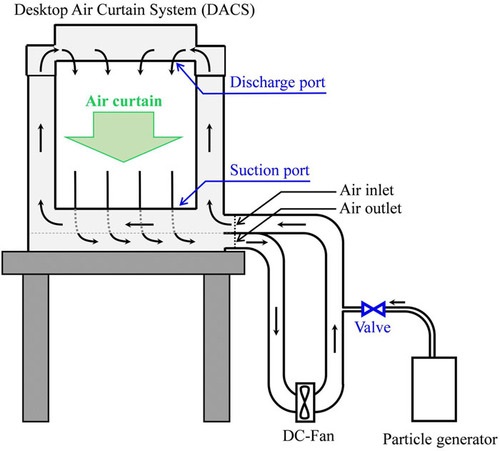 As this integrated system contains both a discharge and a suction port, it can be installed at any location, and is portable enough to be placed on a desk. A high-efficiency particulate air (HEPA) filter inside the suction port can provide air purification.

The new air curtain system was tested by using an air compressor connected to a mannequin to simulate breathing. Dioctyl sebacate, a widely used solvent that spreads easily, was added to the airflow to create aerosol particles, and the blocking effect of the DACS was determined by means of particle image velocimetry and high-speed cameras. As reported in AIP Advances, the aerosol particles approaching the DACS abruptly bent toward the suction port, signifying that air curtain flow fully blocked all incoming aerosol particles.

The researchers plan to incorporate a virus inactivation system into the DACS based on ultraviolet LEDs connected to the suction port.

By posting a comment you confirm that you have read and accept our Posting Rules and Terms of Use.
Advertisement
RELATED ARTICLES
Air curtain system purifies air of viruses, VOCs and particulates
Hot Cooking Oil Droplets May Contribute to Air Pollution
New fiber blocks 99% of coronavirus particles
Plasma-enhanced HVAC filter promises to stop the spread of COVID-19
Team proposes new device to stop the aerosol transmission of COVID-19
Advertisement