Impact of the Oil Crisis on the Centrifugal Pump Market

The global market for centrifugal pumps is expected to grow at a compound annual growth rate (CAGR) of 3.8% from 2014 to 2019, from $33.2 billion in 2014 to over $40 billion in 2019, IHS says. The performance of the centrifugal pump market is closely tied to global economic conditions as well as the growth and development of end-user industries.

Of the three main regions (the Americas; Asia Pacific; and Europe, the Middle East and Africa [EMEA]), EMEA is estimated to have had the largest share of global revenues in 2014 at 46%, followed by Asia Pacific at 34% and the Americas with 20%.

In Asia Pacific, China accounted for 60% of 2014 market revenues and was also the largest country in the world in terms of global centrifugal pump sales, IHS says. Economic difficulties in China and the Eurozone have slowed and will continue to slow pump sales for the global market. The negative impact from the decline of oil and gas prices will continue to perpetuate the global centrifugal pump market’s low growth and even contraction.

The Eurozone’s sluggish economic recovery will impede industrial investment in the EMEA region. The refugee crisis, coupled with the risk of escalating terrorist attacks, is expected to further erode investor confidence and, in turn, hinder the growth of EMEA’s centrifugal pump market. In Asia Pacific, despite China’s economic slowdown, the urbanization and development of India and the rest of the emerging countries in the Asia-Pacific region are expected to lead to mid- to long-term growth. In the Americas, IHS predicts growth to outpace that of the Asia-Pacific and EMEA markets, with a CAGR of 4.3% from 2014 to 2019. This is because the accelerated growth of the U.S. commercial building sector and increased consumer spending will offset the negative impact of Latin America’s economic recession.

China, the world’s largest country market for centrifugal pumps, is forecast to maintain its market-leading position through 2019, with close to $8.4 billion in revenues in that year, comprising 21% of global revenues. 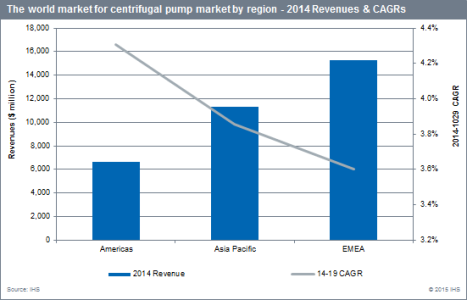 Image source: IHSWhile the use of centrifugal pumps in heavy industries will continue to be hit hard by slumping oil prices, general and municipal industries are expected to grow, leading to an offsetting of growth/decline.

Over the forecast period, the non-industrial and general industry sectors are poised for stable growth despite the economic downturn. For instance, the commercial building, pharmaceutical, chemical, and municipal water and wastewater industries are forecast to outperform the total sector’s average growth during the forecast period. Conversely, heavy industry sectors, such as oil and gas, mining and fossils and nuclear power generation, are forecast to experience below-average growth.

The decline of oil prices has caused turmoil within the oil and gas industry, resulting in "significant" reductions of capital expenditure. IHS forecasts that the troubled industry will decline the most of any industry in 2015, at a higher rate of -9.4%. The market slowdown is expected to continue in 2016. Additionally, the mining industry has been struggling since the end of 2012, IHS says, with sluggish demand and weakening global prices. Investment in the mining industry will remain low throughout the forecast period. Centrifugal pump revenue in the nuclear power generation industry is expected to decline at a CAGR of 1.5% from 2014 through 2019.

Following the Fukushima Daiichi accident in Japan in 2011, several countries have decided to close nuclear plants and cancel planned ones, despite their role in reducing carbon emissions. At least for the short to midterm, this will reduce demand for centrifugal pumps in nuclear power generation.
On the other hand, municipal water and wastewater as well as commercial buildings are forecast to strengthen their positions as the two largest industrial sectors in terms of revenues due to rapid urbanization in emerging markets, accounting for 25.7% ($10.3 billion) and 22.5% ($9.0 billion), respectively, of the global centrifugal pump market in 2019. In addition, the chemical, food and beverage and pharmaceutical sectors are projected to gain market shares over the forecast period, comprising 5.6%, 3.4% and 2.0% of the total market in 2019, respectively, due to an increase in consumer demand.

By posting a comment you confirm that you have read and accept our Posting Rules and Terms of Use.
Advertisement
RELATED ARTICLES
Market forecast: Oil and gas pump sector on trend to expand
Heat Measurement Market to Top $1 billion by 2018
Growth Returns to the Market for Motion Controls in 2014
Asia Pacific Boosts Electric Motors in Automotive Uses, IHS Says
Saudi Arabia Tops India as Largest Defense Market for U.S., IHS Says
Advertisement 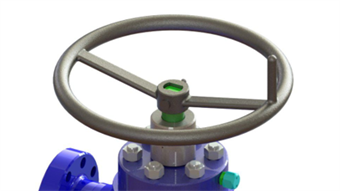 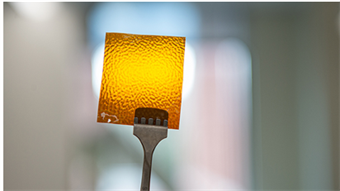 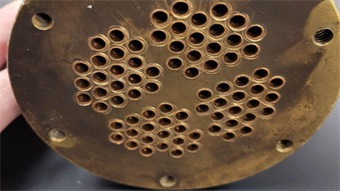