Tanker designed to transport hydrogen from Scotland to Germany

Netherlands-based C-Job Naval Architects has unveiled a concept for a brand-new class of liquid hydrogen tanker developed in partnership with LH2 Europe. The vessel will transport green hydrogen produced with the abundant renewable electricity available in Scotland to terminals in Germany, where it will be marketed at a price competitive with diesel.

The initial design envisions a liquid hydrogen tanker of 141 m length and a storage capacity of 37,500 m3. The vessel will be powered by hydrogen fuel cells and equipped with three liquid hydrogen storage tanks. The 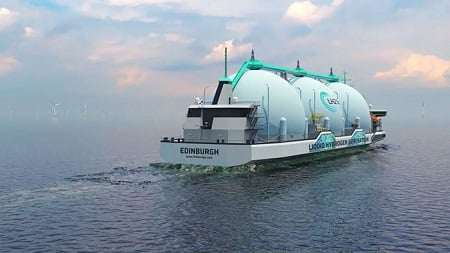 Source: C-Job Naval Architects tanks will have a much lower boil off relative to those currently used in the maritime industry. These tanks will enable capture of the limited remaining boil off for direct use in the hydrogen fuel cells, providing power to the propulsion systems and resulting in emissions of water only.

As currently planned by LH2 Europe and C-Job Naval Architects, the tanker will deliver 100 tons of hydrogen per day, and gradually increase the delivery to 300 tons per day, depending on demand. The tanker has sufficient capacity onboard to deliver fuel for 400,000 medium-sized hydrogen cars or 20,000 heavy trucks.

The ship is expected to be ready and commissioned six months before the first delivery of hydrogen in 2027.

Re: Tanker designed to transport hydrogen from Scotland to Germany
#1