An extension of the solar Investment Tax Credit (ITC) – the main driver of solar growth in the United States – was included in an omnibus spending bill agreed upon in Washington, D.C. December 15. It likely will be finalized and voted on by December 18.

According to Ash Sharma, senior director, solar, IHS Technology, and Josefin Berg, senior analyst, solar, IHS Technology, the the key points for solar power are that the ITC will be extended from Dec 31, 2016 and instead stepped down from 30% to 10% until 2024. Projects that start construction by 2019 will receive the current 30% ITC. Projects that begin construction in 2020 and 2021 will receive 26% and 22%, respectively. All projects must be completed by 2024 to obtain these elevated ITC rates. For residential photovoltaic (PV) systems, a similar tax credit phase-out applies until Dec. 31, 2021, after which the tax credit scheme ends.

(Read why the U.S. solar industry was already poised for a bright fourth quarter of 2015.)

IHS says that the U.S. Congress agreed on a bill that would see the solar ITC extended by an additional five years, as part of a $1.15 trillion spending bill. The House is expected to vote on the legislation on December 17 or 18. Although opposition could block immediate approval of the full bill, IHS says that it "looks close to certain" that the ITC extension will go ahead. 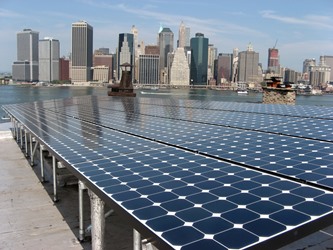 Extension of the ITC for solar power projects relieves the solar industry of the pressure to complete projects in 2016. Image source: NREL/Aeon SolarIn addition to an extension of the solar ITC, production tax credits for wind installations will also be introduced, in return for a removal of a 40-year long ban on oil exports from the United States.

Analysis conducted just two weeks ago by IHS, prior to the extension of the ITC forecast that U.S. solar installations would reach nearly 17 gigawatts (GWdc) in 2016 driven by the rush from developers to finish projects ahead of the December deadline. This would then lead to a drop to 6.5 GW in 2017. The impact on the global solar industry would have been "huge," IHS says. IHS previously predicted global installations would peak at 70 GW in 2016. That would represent a 20% increase over 2015 and largely driven by demand from the United States. However, the "cliff-edge in demand facing the country at the end of 2016 would have led to a global decline of 10%in 2017, with installations falling back to 63 GW," IHS says.

This projected decline was based on a bottom-up assessment of more than 70 countries globally, based on known policy conditions. The effects of a sharp contraction in the United States was expected to be compounded by a stagnation of demand in China and Japan – both of which, like the U.S., had previously experienced boom years.

Extension of the ITC for solar power projects – and the changed deadline criteria from “placed in production” to “started construction” – relieves the solar industry of the pressure to complete projects in 2016. For projects that are contracted to come into place by the end of 2016, IHS anticipates that developers will renegotiate the deadlines for the least advanced projects. The majority of pipeline projects that are not yet ready for construction are forecast to be completed after 2016, with peaks in 2020 to 2023. In parallel, the extension of tax-credits for residential PV enables steady growth of this segment through 2022.

Currently, the PV project pipeline in the United States amounts to 58 GW, of which 20 GW have power purchase agreements (PPAs) in place. According to initial assessments from IHS, the five-year extension of the ITC could spur developers to continue growing the pipeline at the current rate of 15 GW per year. Given the overhauled conditions, a high-level, initial assessment conducted by IHS now projects U.S. installations of 12 GW to 14 GW in 2016, with 3 GW to 5 GW of utility-scale projects to be shifted from 2016 to later years. IHS forecasts U.S. installations to grow between 13 GW and 16 GW in 2017.

The result of the extension to the solar ITC is not just good news for the U.S. solar market, but is a net positive for the global solar industry as a whole, IHS says. While prior to the extension of the ITC IHS forecast a 10% decline in global installations, this forecast has now been reversed. Global solar installations are now expected to reach between 66 GW and 68 GW in 2016, growing to between 70 GW and 73 GW in 2017.

Other changes to the ITC proposed would also create a more stable environment for the global solar industry as reductions to the credit would be stepped down over several years rather than a hard cut-off. In addition the cut-off date for support for projects would be assessed based on when a project starts its construction rather than when it is completed.

The fall in solar installations which was modelled before the extension to the ITC also had "major consequences" for the supply chain, with IHS previously predicting a "sharp correction" in both solar hardware prices and also overall system prices. While full analysis will take further time, IHS expects a "much more moderate decline in pricing over the next two years at least" and a "much more stable and predictable environment for the supply chain as a result."

By posting a comment you confirm that you have read and accept our Posting Rules and Terms of Use.
Advertisement
RELATED ARTICLES
U.S. Solar Capacity Projected to Double in 2016
PV Growth Likely to Remain Strong Through 2016, IHS Says
Here's why wind energy development is likely to peak in 2020
U.S. Offshore Wind Moves Forward at a Crawl
Solar Installations Fell Sharply in Q3
Advertisement