India and Japan Agree to Cooperate on Nuclear Energy

India and Japan signed a memorandum on cooperating in nuclear energy. However, a number of technical and legal issues must be resolved before a final agreement can be signed. The news was reported by World Nuclear News. 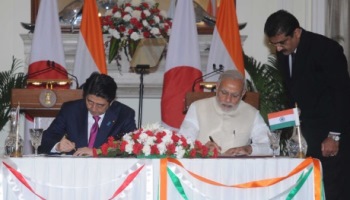 The signing would enable India to import Japanese nuclear technology and services. Abe and Prime Minister Modi also affirmed their commitment to work toward India becoming a full member of the Nuclear Suppliers Group.

India was largely excluded from international trade in nuclear plant and materials for more than three decades because of its position outside the comprehensive safeguards regime of the Nuclear Non-proliferation Treaty. Special agreements ended its isolation in 2009 and the country may now engage in nuclear trade with countries with which it has since signed cooperation agreements: Australia, Canada, France, Kazakhstan, Russia, the UK and the U.S. Foreign technology and fuel are expected to boost India's nuclear power plans.