Dow Chemical and DuPont have announced a plan to merge, combining two U.S. industrial and chemical icons in a deal valued at more than $130 billion, which dwarfs the industry’s largest deal to date, (AzkoNobel’s 2008 acquisition of ICI for $17 billion). The combined company will be named DowDuPont and be dual-headquartered in Midland, Mich. and Wilmington, Del.

The companies intend to subsequently pursue a separation of DowDuPont into three independent, publicly traded companies through tax-free spin-offs. This would occur as soon as possible, which is expected to be 18-24 months following closing, subject to regulatory and board approval. 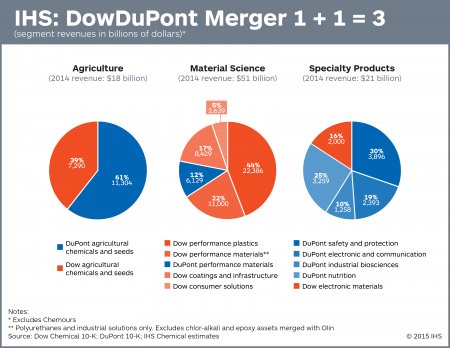 Merger may be the natural evolution of an industry that has seen giants such as Hoechst, Union Carbide, ICI and others disappear during the past 20 years, IHS says.According to a statement issued by the companies, “The transaction is expected to deliver approximately $3 billion in cost synergies, with 100% of the run-rate cost synergies achieved within the first 24 months following the closing of the transaction. Additional upside of approximately $1 billion is expected from growth synergies.”

Dow was third in IHS ChemicalWeek’s latest “Billion-Dollar Club” ranking of the largest chemical makers by revenue, with sales of $58.2 billion in 2014. DuPont ranks eighth, with 2014 revenue of $24.7 billion. The two companies have each faced activist and investor pressure to consider more aggressive portfolio rationalization than they have undertaken to date, IHS says.

The spin-offs will include one of the leading global pure-play agriculture companies with revenue of $18 billion based on 2014 sales. The largest business will be a material science company with sales of $51 billion, made up of Dow’s current franchise, excluding agriculture, and electronic materials, plus the addition of DuPont’s performance materials business, including engineering plastics and elastomers.

Advisory committees will be established for each of the businesses. Breen will lead the agriculture and specialty products committees, and Liveris will lead the material science committee. DowDuPont’s board is expected to have 16 directors, consisting of eight current DuPont directors and eight current Dow directors. The full list of directors will be announced prior to or in conjunction with the closing of the merger. The committees of each company will appoint the leaders of the three new standalone companies prior to a contemplated spin-off.

Separately, Dow announced that it will become the 100% owner of Dow Corning, which is currently a 50-50 joint venture with Corning. Dow and Corning will maintain their current equity stake in Hemlock Semiconductor Group, Dow says.

IHS says that a DowDuPont merger would be followed by a three-way split, broken down to agriculture, material science, and specialty products. As structured now, the deal keeps the core of Dow Chemical’s integrated franchise in place, excluding its agricultural chemical business and electronics materials business (inherited from Rohm and Haas). The materials science business would also take on DuPont’s performance materials business (including engineering plastics and elastomers) as well as Dow Corning. The only true peer on this scale that remains is BASF, IHS says.

This spinoff would be a $12-billion specialty products maker, including DuPont’s safety and protection, electronics, nutrition, and industrial biosciences businesses, plus the addition of Dow’s electronic chemicals business. The deal continues a "dramatic rationalization" of DuPont’s franchise, IHS says. DuPont was the largest chemical maker globally by revenue in 2000. At $12 billion, these remaining DuPont businesses would not rank in the top-30 globally.

The combination of Dow and DuPont’s agricultural businesses likely presages further consolidation in the agriculture segment, IHS says. The cyclical downturn in agriculture has made deals in agriculture all but inevitable—a sentiment confirmed by nearly all senior executives at the big-six agricultural chemical firms. Until this DowDuPont was announced, the top ranks of the big six in seeds and crop protection chemicals have remained unchanged since Novartis and Zeneca combined their agriculture businesses to form Syngenta in 2000, IHS says. "Significant consolidation" has occurred in recent years among tier-2 producers, who typically focus on crop-protection chemicals.

The deal continues the shift, accelerated in the past few years, by the agitation of activist investors, toward simpler and more focused portfolios. The reshuffle of Dow’s and DuPont’s non-agricultural operations would continue the split between specialty chemical and advanced material niches. Upstream integration would be retained for basic chemicals and polymers (materials) while bringing scale to the specialty business.

Further, the planned acquisition of Dow Corning—a major producer of silicones—will "significantly strengthen" the combined entities’ electronic materials and consumer care portfolios, IHS says. Likewise, DuPont’s portfolio complements Dow’s with regard to food and nutrition and personal care product ingredients: DuPont (Danisco) is a major player in nutrition and health and a small player in the personal care products industry. While IHS Chemical views this segment as more specialty in nature, this part of the portfolio is slated to remain with the Materials’ focused company, along with the majority of the legacy Dow franchise.

A recent IHS Chemical Specialty Chemical Update Program Overview of the specialty chemicals industry report identifies 30 or so such niches ranging from more than $40 billion/year in revenue (specialty polymers, construction chemicals, cleaning ingredients, and electronic chemicals) all the way down to thermal printing chemicals, valued at $670 million. Paints and coatings, roughly a $125-billion/year segment globally, and industrial gases, are broader specialty-like niches that have become dominated by focused producers.

While Dow retains the upstream integration with expanded capabilities to bring a full portfolio of advanced materials, increasingly Basics (along with integration to commodity plastics) will likely be commanded by integrated oil companies, state-owned enterprises, emerging players in Asia and the Middle East, and a few remaining regional players in the United States and Europe, IHS says. The last group would include a DowDuPont combination with an extended advanced material portfolio, LyondellBasell Industries, Ineos, and Westlake Chemical, notwithstanding the presence of other MNC producers such as ExxonMobil, Shell or ChevronPhillips Chemical.

The rest of industry is focusing on targeted and more specialized niches spread across more than 30 segments. The emphasis here is on innovation, market knowledge and close customer relationships. Horizontal diversification is now seen as a distraction for some operators, as their business focus intensifies and broad-based ambitions are reduced.

While not true for agriculture, research and development (R&D) emphasis for chemicals narrows on developing applications with new materials penetration and extending product lines rather than core invention and developing new chemistry. These strategies will likely be tested in time as emerging players in Asia, including state-owned enterprises and national champions, continue to expand research capabilities and surely won’t limit themselves to basic chemical production over the long haul.

This may well be the natural evolution of an industry that has seen giants such as Hoechst, Union Carbide, ICI, and others disappear during the past 20 years, but, IHS says "we are truly witnessing a tectonic change and a continued evolution of diversified era in the global chemical industry."