Robotics manufacturer Tompkins Robotics has launched a robot capable of increasing the number of sort destinations in e-commerce warehouses.

Designed for e-commerce fulfillment, store replenishment and reverse logistics, the tSort3D can handle and sort a variety of products.

According to the company,“ tSort3D uses a tray as the carrier, while other solutions use a cross belt. Tompkins Robotics’ unique tray design ensures that round, cylindrical, and oddly shaped items are compatible with our system. We can now deliver sortation designs that connect thousands of sortation destinations from any point of induction.”

“The capabilities of tSort3D far exceed other dense sortation systems on the market today. This solution solves a pressing need in distribution and fulfillment operations that no previous automation solution has fully addressed.”

By posting a comment you confirm that you have read and accept our Posting Rules and Terms of Use.
Advertisement
RELATED ARTICLES
Unbox Robotics launches vertical robotics sortation solution
Berkshire Grey launches robotic product sortation solution
New sorting robot to make its warehouse debut
Invata introduces its new line of warehouse robots
Eight industries that will need to adapt to automation
Advertisement 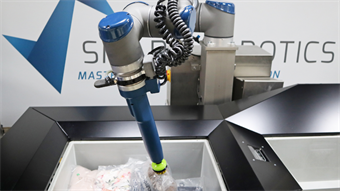