Researchers at Washington State University (WSU) Tri-Cities have discovered a method to convert a common wood by-product into hydrocarbon molecules that could be used as jet fuel.

A procedure developed and patented by Bin Yang, associate professor of biological systems engineering, uses a catalytic process to convert lignin, an organic polymer that makes plants woody and rigid, into a mix of hydrocarbons in a single reactor. The product can be separated and purified to obtain hydrocarbons that are usable in turbine engines. 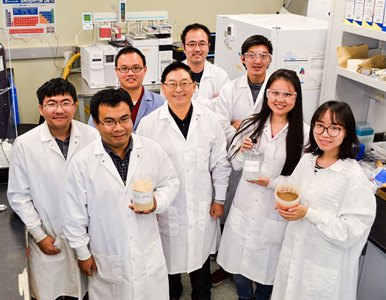 Bin Yang (center) patented a catalytic process to convert lignin into jet fuel hydrocarbons. Image credit: WSU.Lignin is one of the most abundant renewable carbon sources, with 40-50 million tons produced annually worldwide. However, it is generally treated as a waste by-product of the conversion of plant biomass into biofuels such as ethanol.

Cavalieri says that jet fuel requires the same nominal range of molecules as kerosene, which isn’t as volatile as gasoline but also doesn’t freeze at the cold temperatures found at high altitude.

“With the research being conducted by Dr. Yang, it may be possible to develop a more complete suite of molecules required for turbine engine systems using only biomass feedstocks, making the process more economically feasible and efficient,” he says.

Yang’s team is working with Boeing Co. to develop and test the hydrocarbons targeted for use as jet fuel.

By posting a comment you confirm that you have read and accept our Posting Rules and Terms of Use.
Advertisement
RELATED ARTICLES
New Eco-Friendly Jet Fuel Being Developed from Corn Cobs and Wood Chips
Team turns human waste into airplane fuel
Sustainable aviation fuel derived from lignin
High-Density Bio-Jet Fuel Produced from Eucalyptus
Video: a Boost for Ethanol-derived Jet Fuel
Advertisement