Fundamentals of bolts and screws 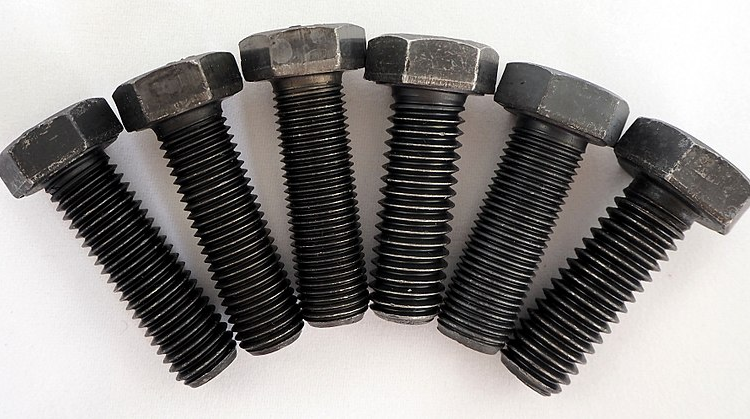 Since the terms "bolt" and "screw" were in use before the advent of easily produced helix fasteners, they are often synonymous. However, several standards bodies have attempted to differentiate the terms, with many concluding that it is not the devices themselves which are fundamentally different, but how they are used.

As provided by Machinery's Handbook and ASME B18.2.1, bolts are externally threaded fasteners that are inserted into a threaded hole or held in the assembly by a mating nut. Torque can be applied to the bolt head or the nut, but typically not the workpiece.

Screws are externally threaded fasteners into pre-tapped holes or that can perforate a material and create its own internal thread. Screws are fastened by torque applied to the head. This definition is still somewhat ambiguous and is not all-encompassing, but does provide a basis to begin differentiation.

[Learn more about screws on GlobalSpec.com.]

The size of the screw has two important dimensions: the screw diameter and the shaft length. The screw diameter is the diameter of the shaft, and is extremely important when picking out machine screws, as the nuts will have to be the same diameter. This will also be the diameter hole that will need to be drilled, if there is not one in place already. For wood screws, drywall screws and others, the shaft diameter can be chosen by aesthetics and other personal preferences.

The length of the screw is also important. For projects using machine screws, this will determine how far the screw will stick out from the project, or how much clearance there is between pieces. Nothing says “amateur hour” quite like a beautifully constructed project with a bunch of screws protruding into space. Furthermore, screws that are too long may interfere with wires, punch into other components, or simply be a way to snag skin and clothes during construction.

Pitch refers to the number of threads per unit length that the screw has along its shaft. For imperial units, this is referred to as “threads per inch” or “TPI.” However, in the metric system, threads are specified as the distance between peaks along the screw’s shaft. Bolt Depot describes the difference in more detail.

The main practical difference is that the metric bolts are divided into “coarse” thread, which means a land every 1.5 mm, and “fine thread” means a land every 1 mm. With only two standard thread counts, the task of finding matching nuts is simplified. For the imperial system, there are many standard TPI, meaning the DIY’er raiding their parts drawer may find that an 8 TPI screw threads part of the way through a 6 TPI nut, until friction prevents it from turning any farther.

The shape of the drive, or head of the screw, comes in quite a few standard varieties. The two biggest distinctions are whether the screw is meant to be countersunk and what type of tool should be used to drive the screw into place.

Non-countersunk screws are available with several head profiles, including round, hex, square, oval and others. All of these heads will protrude from the surface of the workpiece, and so the end use must be considered. Is the piece going to need to be disassembled frequently? If so, a hex bolt that can be grasped with a wrench (or worse, yet more realistically, pliers). Is the screw going to be in a place where someone’s hand may brush against it? Rounded or oval designs are less likely to snag on clothes and skin.

[Learn more about bolts on GlobalSpec.com.]

To assemble any sort of project, one must have matching drivers and screws. This means both the shape and the size of the driver and screw should match. It is tempting to use whichever driver is available, but this leads to ruined screw heads that leave a rough, unfinished surface.

The most common driver types are slotted and cross (or Phillips), though a hybrid that allows either is becoming much more popular. Because these are the most common, they are also the easiest to disassemble, should the final product need to be assembled and disassembled repeatedly.

The next most common are hex or star drivers, sometimes referred to by their most common brand names, Allen and Torx, respectively. These are typically only available as machine screws.

Specialty drivers, such as triangles, squares, hollow stems and others are used for easy assembly and disassembly by a worker, but difficult disassembly for the average person. They are more secure and more tamperproof.

Figure 1. These specialty “Tri-Wing” drivers (top) and “Y” drivers” (bottom). Assembly is quick with the Y driver, but the passer-by with a Swiss Army Knife would have trouble disassembling the same piece. Source: Temdor/CC BY-SA 3.0

There are so many considerations when optimizing a design to include screws or bolts, and this article only touches the surface. However, through the design process, careful thought can improve each design, with an eye toward fasteners. A few awkward bolt heads, scraped knuckles or delays due to searching for a specialty driver can make future designs cleaner, safer and more purpose-oriented.

By posting a comment you confirm that you have read and accept our Posting Rules and Terms of Use.
Re: Fundamentals of bolts and screws
#1

How cool is that! Thank you for this article.

Re: Fundamentals of bolts and screws
#2

"The main practical difference is that the metric bolts are divided into “coarse” thread, which means a land every 1.5 mm, and “fine thread” means a land every 1 mm. With only two standard thread counts, the task of finding matching nuts is simplified."

Is there some context missing? Was the writer specifically referring to ØM10 parts?

"Countersunk screws always have a flat top (to keep it flush with the surface), and are available in virtually all drive types."

Just one example of a "not-flat" countersunk head is the oval head. The "trim head" is another example. Depending on application, it may be necessary to have the hole bored and then countersunk to mate properly with the oval or trim head.