Australia is set to become the world’s first exporter of liquefied hydrogen after the Suiso Frontier docked at Victoria’s Port of Hastings this week to carry 1,250 m3 of super-cooled (-253° C) liquid hydrogen from the Latrobe Valley to Kobe, Japan.

The arrival of the vessel marks the next phase of the $500 million Hydrogen Energy Supply Chain (HESC) pilot project, which will see the specially built carrier transport liquified hydrogen generated from brown coal. The venture is led by a consortium including Japan’s J-Power and Kawasaki Heavy Industries, along with Shell, AGL and with the support of the Japanese, Australian and Victorian governments.

The 225,000 tons of carbon neutral liquefied hydrogen produced by HESC in a commercial phase will contribute to reducing global carbon dioxide emissions by some 1.8 million tons per year and provide valuable infrastructure for other hydrogen projects in the region. 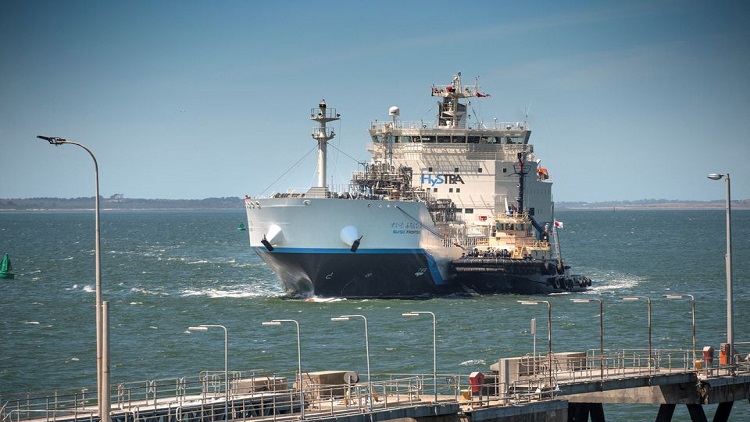 During the pilot project, 99.99% pure hydrogen has been produced from Latrobe Valley coal and biomass via gasification, trucked to Hastings, cooled and subsequently liquified to less than 800 times its gaseous volume to create highly valuable liquefied hydrogen. The loading of liquefied hydrogen onto the Suiso Frontier for the return journey to Japan makes the HESC project the most advanced and scalable hydrogen project in Australia and the first project in the world to make, liquefy and transport liquid hydrogen by sea to an international market.

What is this hydrogen used for? ICE's? Fuel cells? Balloons?

How much carbon is released using brown coal to make it? Is there a net savings in carbon emissions?

The video clip acknowledges the CO2 problem and they hope to move toward renewables for the energy source. They have the space for solar and also wind. Unfortunately coal deposits in Australia give a large temptation to their use. They truck the hydrogen, so that is another negative to their present infrastructure.