Recently selected as an Innovation Award honoree at CES 2022, the ADIBOT-A can be programmed to navigate and sanitize multiple floors in a building using its 360° UVC light coverage.

Using hospital-grade UVC light, the ADIBOT-A kills bacteria, viruses and fungi in indoor settings such as hospitals, schools and other high-traffic spaces. The ADIBOT-A is a build-out of last year’s stationary disinfecting ADIBOT iteration. 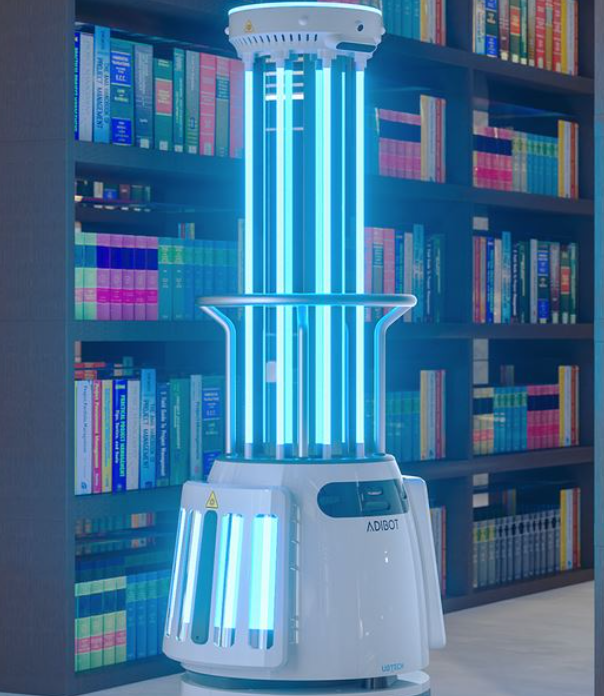 “The stationary device that we launched last year was to address a segment of the market where full autonomy wasn’t necessarily needed,” said John Rhee, general manager of UBTECH’s North American division. “Our reasons for getting into a fully autonomous version is we’re also finding that there are a lot of shortages and bandwidth used by people performing those jobs, and they can focus on other important tasks while [the mobile robot] takes the disinfection tasks out of the daily workload.”

To create the mobile ADIBOT-A, UBTECH incorporated lidar sensors at the top and base of the robot. These light detection and ranging sensors were used to create a 3D representation of the surveyed environment. Coupled with multiple depth sensors, artificial intelligence algorithms and assorted hardware, the ADIBOT-A is capable of building a 3D diagram of the space to be cleaned.

The ADIBOT-A is currently launching across the U.S. Watch the accompanying video that appears courtesy of UBTECH for more information about the ADIBOT-A.

By posting a comment you confirm that you have read and accept our Posting Rules and Terms of Use.
Advertisement
RELATED ARTICLES
Robot simultaneously disinfects the air, surfaces
Shining the (UVC) light on COVID-19
Airplane cleaning robot helps assist in disinfecting germs
Scientists in Ireland develop UVC light-emitting drone to disinfect surfaces amid the pandemic
Qatar University develops dual-purpose robot for the COVID-19 era
Advertisement