Coating promises to warm houses in the winter, cool them in the summer

A team of scientists from U.S. Lawrence Berkeley National Laboratory (Berkeley Lab) has developed a smart roof coating for keeping homes warmer in the winter months and cooler in the summer months.

According to its developers, the temperature adaptive radiative coating (TARC) performs radiative cooling wherein skyward facing surfaces eject heat into the air in the form of thermal radiation. As such, the coating promises to reflect sunlight and heat away from buildings in the summer months and trap heat during the winter months. 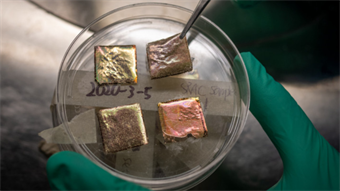 TARC is reportedly composed of vanadium dioxide (VO2), which is a compound that conducts electricity, but not heat, when it reaches a temperature of 153° F.

In addition to applications for home heating and cooling, the researchers are eyeing the coating for electric vehicles, satellites and electronics.

By posting a comment you confirm that you have read and accept our Posting Rules and Terms of Use.
Re: Coating promises to warm houses in the winter, cool them in the summer
#1

It would be nice to access the actual journal article; the supplemental PDF gave some of the details. Their desire is to get a surface whose infra-red (IR) emissivity changes dramatically over the material's temperature range encountered on a typical roof--high when hot and low when cold. The graphed emissivities seem to fulfil this desire, but the stated constant emissivity of 0.90 used with their IR camera does not agree.

They spent a lot of time calculating a 10% net energy saving for comfort cooling of a structure, assuming their material was used, and assuming it could be produced in a way that was environmentally safe and durable enough for multi-year use. Neither of these assumptions are valid at this time, and may never be valid. The "pay back" time before the cost of the installation is paid for by the energy savings typically has to be less than 2-5 years, and I doubt this will ever be achieved.