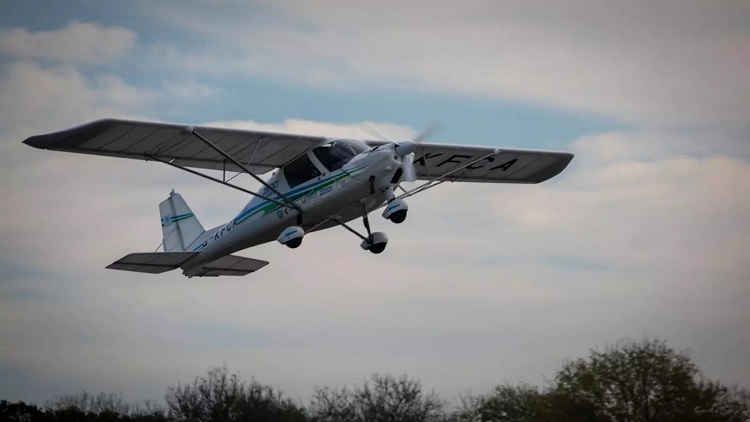 The Ikarus C42 microlight was powered by a pure synthetic fuel. Source: U.K. Ministry of Defence

On November 2, 2021, the U.K. Royal Air Force (RAF) achieved a new record by completing a world-first aircraft flight powered entirely by synthetic fuel. An Ikarus C42 microlight aircraft was fueled during the 21-minute flight over Cotswold Airport by a synthetic UL91 fuel made by British energy company Zero Petroleum.

The event was logged by Guinness World Records as a world first for an aircraft using only synthetic fuel and was initiated under Project MARTIN, part of a wider effort to reduce carbon emissions.

ZERO SynAvGas aviation fuel is manufactured by extracting hydrogen from water and carbon from atmospheric carbon dioxide. Using energy generated from renewable sources like wind or solar, these are combined to create the synthetic fuel by application of Fischer-Tropsch technology. Its use requires no modification to the aircraft or the engine and offers the potential to save 80% to 90% of carbon emissions per flight.

The RAF plans to have its first net zero emissions airbase by 2025, and has set a goal of a net zero force by 2040.

By posting a comment you confirm that you have read and accept our Posting Rules and Terms of Use.
Re: World record RAF flight demos potential of synthetic fuel
#1

Ok, but this technology only seems like a stop-gap. If it requires hydrogen to be generated via electrolysis then the only reason to add carbon is so that it is compatabile with existing airframe and engine designs.

Long-term, if you're going to go to the trouble of electrolysis to generate H2, you want to design your a/c and engines (either combustion of fuel cell) around H2 without the need for adding the carbon. No localised air pollution, lower combustion temps (less NOx/longer engine life), and any carbon capture can be locked up rather than re-released. Downside; bigger airframe/tanks, new fuel.