Volatile organic compounds (VOCs) are created by many common household and industrial products, including paint, pesticides, fuel and even deodorant. They are a major source of air pollution and ongoing exposure to some can lead to serious and possibly long-term health problems, including cancer, as well as more minor conditions such as nasal irritation and respiratory issues. Estimating exposure in a home or workplace is challenging with current devices that are limited by what they are capable of detecting. A new personal air-sampling system, however, has been shown to detect a wide range of VOCs from a badge about the size of a credit card.

The researchers who developed the device presented their results at the recent American Chemical Society fall meeting.

"In every situation there's a unique set of compounds that could be present in the air, including potential 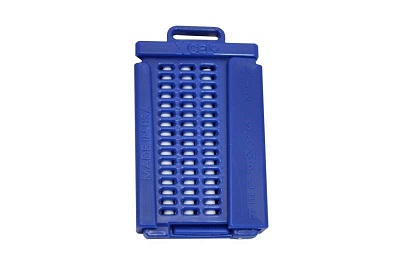 This credit-card-sized wearable badge contains a new type of silica that latches onto a wide range of VOCs. Source: Airotecthazards that we do not know about," said Allen Apblett, Ph.D., the project's senior researcher, who presented the research. "Using a single material, we can capture many classes of these compounds, called VOCs, and potentially offer a much more comprehensive picture of exposures."

The U.S. military has great interest in the new sampler as a tool to better understand the health threats its personnel face, and has contributed significant funding toward its development. Apblett, a professor at Oklahoma State University and co-founder of Airotect, the company developing the sampler, added that it can also be used in workplaces and homes.

The advantage of the Airotect device over existing technology is its ability to absorb “the broadest spectrum of VOCs,” said Apblett. Currently a worker concerned about formaldehyde, benzene and naphthalene, for example, would need multiple devices to test for those compounds in one location.

The Airotect detector uses a silica material with nanoscale pores contained within the badge that can be attached to clothing. The team is also experimenting with something resembling a pen that could be kept in a pocket and other device configurations, such as a fabric patch. The silica, called OSU-6, binds VOCs in its pores through weak electrical attractions known as van der Waals forces. The forces are enhanced by the tight curvature of OSU-6’s nanopores. The physical, rather than chemical, bonds allow the material to latch onto a wide range of compounds and bind more strongly than the industry standard.

Following use, the badge is sent to a lab where the material is warmed and the compounds are released so the researchers can identify and quantify them. The capacity of the device to detect over 100 compounds was demonstrated in lab-based experiments. OSU-6 stabilizes unstable or reactive compounds, which aids in analyzing compounds that are traditionally difficult to monitor. Research is underway to test its ability to detect common pollutants found in commercial manufacturing operations and agricultural production facilities, as well as in real-world military scenarios and a student dorm room.

By posting a comment you confirm that you have read and accept our Posting Rules and Terms of Use.
Advertisement
RELATED ARTICLES
Sensors sniff out decay in books old and new
Device quickly detects VOCs
PEC Cell Yields Hydrogen from Polluted Air
Fundamentals of air quality sensors
IAQ platform uses e-AI for smart odor sensing
Advertisement