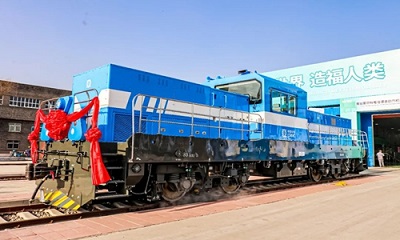 Source: CRRC Datong Co. locomotive using a hydrogen fuel cell system developed by SPIC Hydrogen Energy Company. The locomotive has a design speed of 80 km/h and can run with 700 kW of continuous power for 24.5 hours when fully loaded with fuel and its maximum traction load on straight roads reaches 5,000 tons.

The new-energy locomotive is expected to cut carbon emissions by about 96,000 tons per year running on the coal railway linking the Baiyinhua coal mine in Inner Mongolia with the port of Jinzhou in northeast China’s Liaoning Province. The next step will be to develop a 2,000 kW hydrogen fuel cell hybrid locomotive suitable for broader railway industry applications.

Haha ....and they're using it to haul coal, clean hauling pollution...kudo's

Re: Watch a trial run of China’s new hydrogen fuel cell locomotive
#4
In reply to #2
DaveD

Ironic for this application maybe, but it looks like China has declared its entry into the zero emissions race.

Now the world needs the US and India to follow suit.

Simply virtue signalling for people who don't pay attention to what China is really doing.

They have proved the contrary, they have moved ahead when everyone else shot down hydrogen cell technology. Soon we will be importing their engines to haul our loads. Good luck to them for getting ahead.

It does seem strange to use a "green" machine to haul "polluting material". However, using hydrogen fuel cell electricity for such a large machine is remarkable. It will eventually be scaled down to automobiles. Hydrogen fuel cells is the energy producer of the not to distance future. Fear of hydrogen explosions? We run a lot of 18 wheelers here on compressed natural gas. It's about the same pressure that hydrogen would require. Fuel cell powered cars will replace the ICE because they refuel in about the same time as an ICE powered car. Of course, the downside is the production of hydrogen. Starting with producing hydrogen from natural gas. This still leaves carbon emissions. Producing it by electrolysis requires a lot of power. This power will come from nuclear power. The build up of spent nuclear rods will skyrocket. The amount of spent rods per capita of the world will greatly accelerate. The nuclear power advocates (those who benefit from the nuclear power industry), will not publish the amount of nuclear waste generated. How many pounds of spent rods per capita of the world will there be in 100 years? This information is not forthcoming from the nuclear power industry. As I have said many times before, "for every good thing in life, there's a down side".

Re: Watch a trial run of China’s new hydrogen fuel cell locomotive
#6
In reply to #5
IQ

Either way, we have been made dependent on energy sources and that will not go away at all. There is not enough electrical supply anywhere in the world, so other sources need to be used. ICE vehicles is simply a hyped up filler for now and hydrigen will become the No1 fuel source and no matter hat process they use, CO2 will always be a by product. It's a by product of living even if we don't have nuclear, electricity, hydrogen or gas. The world naturally makes methane gas and the oceans have lots of it to release. You can't escape nature and its willy ways.

Re: Watch a trial run of China’s new hydrogen fuel cell locomotive
#7
In reply to #6
PAPADOC

Re: Watch a trial run of China’s new hydrogen fuel cell locomotive
#8
In reply to #7
IQ

Approx 95% comes from natural sources and not man. Quite amazing so what are they going to do about the seas and oceans to stop them producing the problem? And you need CO2 to stay alive and just snippet of oxygen.

But as always, its arguable on both sides. It's the methane that they now worry about. And Gretta T telling kids they are all going to die very soon.

Re: Watch a trial run of China’s new hydrogen fuel cell locomotive
#9
In reply to #8
PAPADOC

There may be something to this "green" business: The sea levels are rising. Some near sea level towns are being flooded. The artic ocean is now navigable. A village in Alaska is being moved because of rising sea level. However, the ice age ended about 10000 years ago. Didn't civilization begin about 10000 years ago? Some claim all this climate change is just the natural change that the earth experiences due to orbital change. I wonder which is correct? The manmade effect or the natural effect?

How much does land subsidence play a part in "sea level rise"?

Re: Watch a trial run of China’s new hydrogen fuel cell locomotive
#12
In reply to #11
PAPADOC

Subsidence occurs when excessive ground water is pumped and the soil consolidates. It takes a lot of pumping for this to occur. I doubt if any of the towns that are now being flooded pump that much water. But it does happen. Parts of downtown Houston are 2.4 feet lower than when they started pumping water. The consolidation is irreversible. But it has been stopped due to less pumping.

I think the flooding of the coastal towns is from increase in ocean water supply from the melting of the artic. However, this may be a natural occurrence.

River deltas subside/ooze into the ocean. Pumping out aquifers can result in subsidence as the soils and strata are compacted when the water is removed.

Melting of the Arctic sea ice will have no effect on the sea levels. When ice on land masses melt, that's a different story.

Sea level rise due to the warming of the climate is WAY overblown and is being used as a political tool to exercise more control over the people. I can go back to the beach in the town where I was raised over 50 years ago and the high and low tides are EXACTLY where I remembered them on the sea wall next to the boat ramp where we used to jump into the water at high tide. The hysteria is absolutely unmitigated male bovine excrement.

Hingham, Mass. has nine-foot tides and this seawall hasn't changed since I was a kid. (There have been some more recent shoreward improvements that can be seen in the picture below, but the basic wall is unchanged.)

Re: Watch a trial run of China’s new hydrogen fuel cell locomotive
#15
In reply to #14
PAPADOC

How do you explain the flooding of towns near the coast that haven't flooded before?

What about that town in Alaska that's being moved?

Re: Watch a trial run of China’s new hydrogen fuel cell locomotive
#17
In reply to #15
IQ

Remember, nothing is permanent as we like to believe, even the sun will stop shinning one day as the universe evolves. You cannot change what nature has set in motion, so the smart thing is, don't build on flood plains and close to beeches unless you understand the consequences that will follow, sooner or later.

Sometimes we get bad weather. Superstorm Sandy for instance.

People have settled into places on the coast since the dawn of time because it's convenient. The earth is not static and no amount of hubris is going to change that.

How does sea level rise occur in one place but not another? Funny thing about water and gravity.

Re: Watch a trial run of China’s new hydrogen fuel cell locomotive
#16
In reply to #14
DaveD

Some parts of the UK are experiencing continued uplift after the loss of ice since the last ice age, while other parts have sea level rise relative to the land height causing accelerating coastal erosion.

I would hope that most scientists do not have a political agenda but are reporting from their scientific observations, although the need for funding may affect how they report.

The accuracy of satellite information on world sea levels is improving year on year.

Re: Watch a trial run of China’s new hydrogen fuel cell locomotive
#13
In reply to #11
IQ

None. That only happens in act 4, scene 2. And all the waters shall rage and roar and be spent upon the land and subside to the depths and voids.