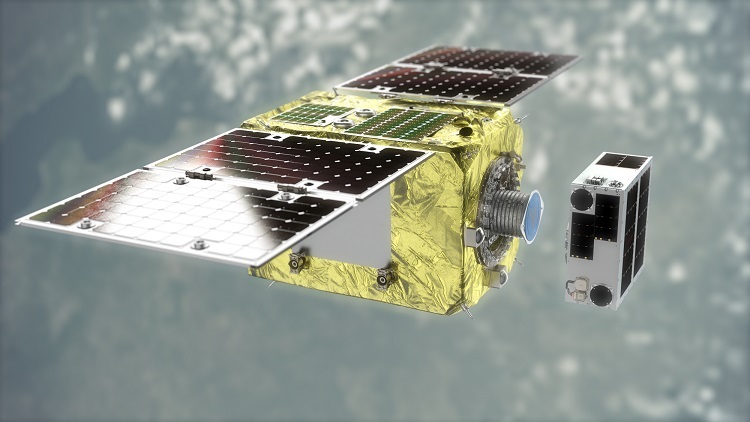 ELSA-d has been in orbit since March 2021 at an altitude of about 550 km and has completed a commissioning phase during which its systems were tested and certified. The most recent phase confirmed the ability to repeatedly capture another satellite.

A core component of the ELSA-d rendezvous suite is the docking plate (DP) that provides a point of contact on the client object for the magnetic capture system and an optically controlled surface for guidance, navigation and control. The DP includes optical markers for guidance and navigation in proximity operations, and ferromagnetic material suitable for magnetic grappling. The grappling interface is designed to be mounted on a client satellite and consists of the flat, disc-shaped DP on top of a supporting stand-off structure. This system makes a defunct satellite easier to identify, assess, approach, capture and de-orbit.

This successful validation of the ability of ELSA-d to dock with a client, such as a defunct satellite, will be followed by tests to autonomously maneuver near a non-tumbling client before capture, and then to capture a tumbling client.

By posting a comment you confirm that you have read and accept our Posting Rules and Terms of Use.
Re: Video: Demo of magnetic capture system seizing space debris
#1

This is fine if your satellite is magnetic.

This is end-of-life servicing, therefore the client junk needs a coded ferrous plate attached to it as a standard pre-launch client sattelite component for EOL capture using this "servicer/client" pairing & coupling methodology.

Latter versions of this servicer will address tumbling junk, and eventually any space debris (probably adding other capture end effectors in addition to, or obsoleting this or any magnetic capture approach).

My first thought is to use induction braking if the debris is of conductive material. The induced energy translation between a strong magnet field being produced by a retro-grade Mag-sat and nearby passing conductive material would require the energy translated to be reinput to the Mag-sat to maintain orbital energy. I believe an electromagnetic method can be used to input orbital energy to the Mag-sat; using the same architecture used to generate the excitation field for the induction braking of the debris. (https://cr4.globalspec.com/thread/11752/Propellantless-Electromagnetic-Propulsion-In-Space-Applications)

Perhaps looking at the Shuttle Tether Experiments as empirical incentive for considering a simple electro-magnetic deorbiting method for end-of-life satellites?

To build in a deorbit process a simple low resistance coil, a switch, and resistive or other load or in series should do the trick.

At the end of life, the switch is closed, Geo-field acts as the excitation field, and the spacecraft cutting the magnetic field lines of the excitation field provides the rate of change. This translates orbital energy to the resistive or other load. A simple electro-magnetic induction process.