Automation threatens the livelihoods of 80 million workers in the U.S. and 15 million in the U.K. over the coming decades, says Bank of England (BoE) chief economist Andrew Haldane.

The emergence of smart machines, "jet-propelled by modern computing," poses a different challenge than did technological innovations of the past, Haldane says. "They have the potential to substitute for human brains as well as hands." 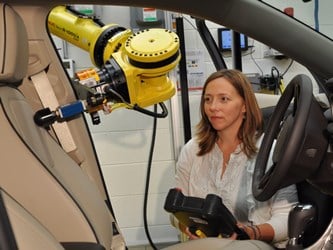 In the U.S. 47% of occupations are at high risk of being automated. Image credit: General Motors.Employment patterns in the U.K. in recent years tell a story of mid-skill jobs being lost, counter-balanced by employment gains at the high-skill and, to a lesser extent, low-skill segments of the workforce, he told at the Trades Union Congress in London on November 12.

The U-shape, or “hollowing out,” has deepened and widened as some mid-skill workers have “skilled-up” through higher or further education while others have “skilled-down," typically by taking a job for which they are overqualified, he says.

As robots extend their skill reach, Aldane says that the “hollowing out” may become ever faster, wider and deeper.

Building on prior research carried out by Carl Benedikt Frey and Michael Osborne, the BoE has attempted to quantify the potential extent of this hollowing out in the U.S. and U.K. They classified jobs into three categories, according to their probability of automation—high (greater than 66%), medium (33-66%) and low (less than 33%).

The Bank economists also looked at how automation might affect the distribution of skills and wages in the economy. Ranking job types by their median wage rate and plotting this against their probability of automation, the Bank found that those most at risk from automation tend to have the lowest wages.

In other words, technology could act like a regressive income tax on the unskilled and could further widen income disparities, Haldane says.

Hunger makes a mighty good motivator to get 'skilled'.

See the entire discussion on CR4, the Engineering Community
Advertisement
RELATED ARTICLES
Robots vs workers? Not quite.
Study: Automation could eliminate 20 million manufacturing jobs worldwide by 2030
Automation to Hit Smaller Cities Harder than Larger Cities, According to Study
Report: Impact of automation could hit most workers
Global Economy Growth Rate of 3% or More Expected in 2015
Advertisement