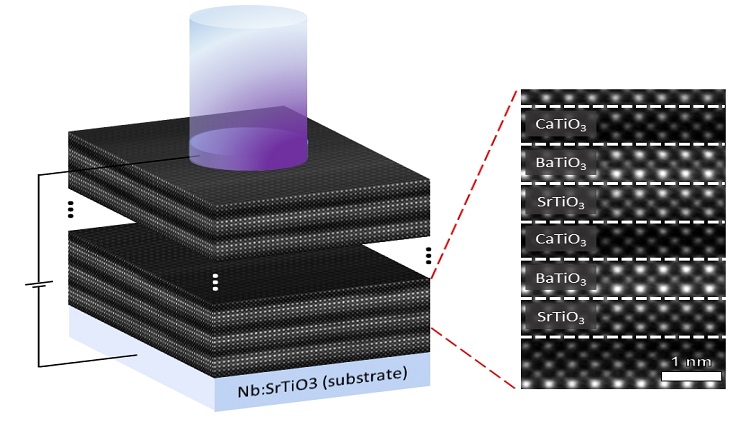 The energy generation of ferroelectric crystals in solar cells increase by a factor of 1,000 due to a new crystalline material arrangement developed by an international research team. The solar panel efficiency gain is achieved with alternating layers of barium titanate, strontium titanate and calcium titanate.

These ferroelectric crystals do not require the p-n junction essential for silicon cells to create the photovoltaic effect, thereby simplifying solar cell production. Ferroelectric barium titanate, which does not absorb much sunlight and consequently generates a comparatively low photocurrent, is embedded between strontium titanate and calcium titanate paraelectric layers. A 200 nm-thick material composed of 500 layers was synthesized by vaporizing crystals with a high-power laser followed by redeposition on carrier substrates.

When irradiated with laser light, the current flow in the new material was up to 1,000 times stronger relative to a pure barium titanate sample. The improved photoelectric effect remained almost constant over a six-month period, indicating the material may be robust enough for commercial application.

Re: Crystalline layers lead to 1,000x boost in photovoltaic power
#1

So how well does it work in sunlight?