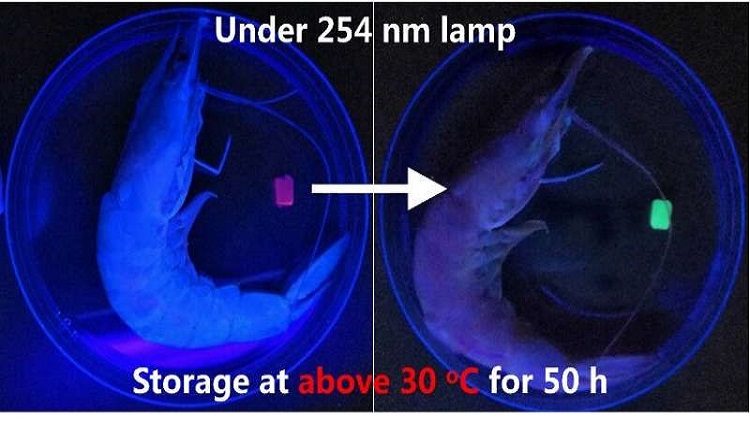 An artificial color-changing material, similar to chameleon skin, can detect seafood freshness. Instead of one uniform matrix, scientists in China and Germany developed the material with luminogens — the molecules that make crystals glow — organized into core and shell hydrogel layers.

A two-luminogen hydrogel chemosensor with this design changes color when amine vapors are released by microbes as fish spoils. Other uses include advancing the development of stretchable electronics, dynamic camouflaging robots and anticounterfeiting technologies.

The scientists developed a multi-luminogen layered hydrogen system from the inside out to determine whether artificial color-changing materials could be imbued with the natural core-shell structure of chameleon skin. They synthesized a red fluorescent core hydrogel to serve as a template. They then incubated the core hydrogel in various aqueous Europium solutions. Finally, the gel was incubated in a growth solution containing sodium alginate and responsive blue/green fluorescent polymers. The formation of the blue and green hydrogel layers resulted from the spontaneous diffusion of Europium ions from the core hydrogel into the solution.

The overlapping core and shell layers of the hydrogels could change from red to blue or green when triggered by temperature or pH changes. The emission color could be adjusted to enable the material to display colors from nearly the full visible spectrum.

To test the two-luminogen hydrogel chemosensor, the scientists sealed test strips of the material in boxes of fresh shrimp or fish for 50 hours. The test strip stored with seafood at 30° C turned vivid green, indicating the food had spoiled, while the box stored at -10° C remained unchanged.

A companion film technology that changes color in response to stretching, pressure and humidity has also been developed by researchers in China and could be used for encryption, strain sensing and anti-counterfeiting applications.

Researchers from the Chinese Academy of Sciences, South China University of Technology, Karlsruhe Institute of Technology (Germany) and Tsinghua University (China) contributed to this study, which appears in Cell Reports Physical Science.

By posting a comment you confirm that you have read and accept our Posting Rules and Terms of Use.
Advertisement
RELATED ARTICLES
Scientists turn to the chameleon to develop color-changing films
A smart contact lens of many colors
Team develops safer anti-cavity, teeth whitening coating
Drug-releasing Hydrogel Tames Arthritis Flares
Changing Colors of Nanoparticles
Advertisement