By Brad Buecker, Process Specialist, Kiewit Engineering and Design Co. | November 06, 2015
Cooling towers are ubiquitous around the world as a method for industrial plant cooling. In Part 1 of this series, we examined fundamental heat transfer calculations in cooling towers. In Part 2, we look at design features that maximize heat transfer, and particularly fill selection and the importance of selecting the proper design. Part 3 will outline correct chemistry control methods to maintain reliable operation.

The key heat transfer concept with any cooling tower is to maximize (as much as the water quality will permit) interaction between the incoming air and the warm water being discharged above. Cooling tower fill increases the surface area of the incoming water and improves heat transfer. In the early days of cooling towers, splash fill was the configuration of choice. The common design then was to use wooden bars or slats to break up the falling water into small droplets. 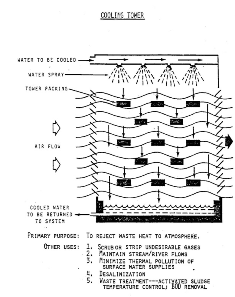 Click to enlarge. Schematic of a typical cooling tower.Splash fill improves heat transfer, and in some cases is still used, albeit with plastic instead of wood as the construction material and for use with water with high fouling potential. However, in most cases film fills are the common choice. The figures illustrate three specific varieties of film fill.

Images courtesy of Rich Aull, Brentwood Industries.As the name implies, film fill induces the cooling water to form a film on the material surface. The filming mechanism maximizes liquid surface area. A guiding principle behind fill design and selection is to increase air-to-water contact, driving up convection and evaporative cooling while reducing pressure drop in the system. [2] Typical fills are made of PVC because of its low cost, durability, good wetting characteristics and inherently low flame spread rate.

The underlying design element that changes for each of the fill types is the flute geometry. Flutes are the air-water passageways that influence the effectiveness of the fill’s thermal and fouling characteristics. Flute spacing is important, and for the designs shown may range from 19 mm for high-efficiency fill to perhaps 38 mm for low-fouling fill. Flute size and flow path must be considered together when designing for the best combination of heat transfer and fouling resistance.

The underlying goal of tower design is to supply the coolest water possible to power plant condensers and industrial plant heat exchangers. Part 1 of this article outlined standard cooling tower heat transfer calculations, and notes that most heat is removed by evaporation of a slight amount of the inlet return water.

No matter how efficient, a cooling tower can never chill the recirculating water to the wet bulb temperature, and at some point costs and space requirements limit cooling tower size. The separation in temperature between the cooling tower-chilled water and the wet-bulb value is known as the “approach.” The data in the table show the relative size of a cooling tower for a range of approach temperatures.

Approach temperature plays an important role in the ongoing debate over wet cooling vs dry cooling. In arid areas of the world, an air-cooled condenser (ACC) may be the only logical selection because of the lack of makeup water for wet cooling. However, ACCs are sometimes installed at power plants where water is not scarce, but where the designers wish to avoid large makeup due to cost, or to avoid regulatory issues related to cooling tower plume and blowdown discharges.

With this in mind, reconsider our earlier example with a wet cooling tower that has a 10oF approach. The water leaving the tower to cool a power plant condenser will have a temperature of 81oF. However, for an ACC operating at an ambient temperature of 90oF, the turbine exhaust steam will only be cooled to a temperature that relatively approaches 90o, but is likely to be higher. The effect on condenser performance and unit heat rate can be dramatic.

Part 3 of this series will examine the reasons why cooling tower water treatment and chemistry are vitally important for maintaining system reliability.