Under the volcano: A source of key metals and geothermal energy

The demand for critical metals such as copper, lithium, and cobalt is projected to steadily increase to meet the expanding needs of wind energy, solar energy and battery equipment manufacturers worldwide. Recognizing the limitations of available metal resources and the environmental havoc wrought by mining operations, an international research team proposes exploiting another source of these crucial metals: volcanoes. 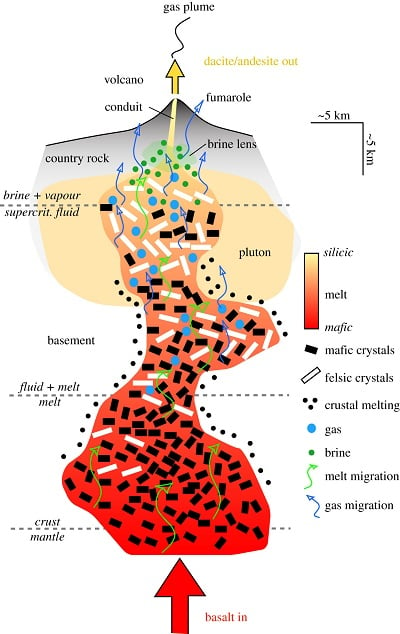 Schematic of a typical transcrustal magmatic system showing ascent of melt as green arrows and fluids as blue arrows. Source: Jon Blundy et al.volcanic magma rise toward the surface and separate into steam and brine as the pressure falls. Metals dissolved in the magmatic gas become concentrated in the dense brine, which in turn gets trapped in porous rock. The less dense, and metal-depleted steam continues up to the surface, where it can pierce the earth’s crust.

Modeling studies conducted by researchers from Moscow State University, University of Bristol (U.K.) and University of Oxford (U.K.) suggest that these volcanic brines could contain millions of tons of copper and useful amounts of gold, zinc, silver and lithium. Extracting the metals from a fluid solution should be cheaper than processing solid ore, generate less waste and use less energy.

The sustainability of the process is enhanced by concomitant production of geothermal energy to power volcanic fluid extraction and processing operations.

A paper on this research is published in Royal Society Open Science.

By posting a comment you confirm that you have read and accept our Posting Rules and Terms of Use.
Re: Under the volcano: A source of key metals and geothermal energy
#1

Sub-volcanic regions can trap hypersaline liquids that form on phase separation of ascending supercritical magmatic fluids. There is permissive evidence for the existence of brine lenses from geophysical studies of the roots of active or dormant volcanoes, for example from electrical conductivity surveys. However, these geophysical signals have ambiguities, and further work is required to resolve the contributions to elevated electrical conductivity due to brines, sulfide minerals and silicate melts, and combinations thereof.

Hydrodynamic calculations show that Cu concentrations in dynamic, hypersaline liquid lenses beneath active or dormant volcanoes may be as high as 7000 ppm at temperatures over 400°C. For our reference model, after 10 000 years of degassing the hypersaline liquid lens contains 1.0 to 1.4 Mt of dissolved Cu, depending on the availability of reduced sulfur. These expectations are consistent with limited measurements of high Cu content in fluid inclusions from geothermal drill-core (table 1), together with analyses of recovered hypersaline fluids at Kakkonda. In order to become potential economic metal resources, hot, metal-rich brines would need to be extracted efficiently without significant reservoir clogging or well-bore scaling. The extent to which such a resource could be exploited depends on the technological challenges and costs of drilling into hot reservoir rocks and recovering hypersaline liquid. If Cu can be extracted in solution form, Cu processing costs may be greatly reduced. Similarly, the co-production of geothermal energy to power fluid extraction and processing would confer additional economic and environmental benefit (e.g. [162]). We have focused only on Cu; the presence of other metals in magmatic fluids, including Li, Zn, Pb, Au and Ag [4] allows for significant co-recovery. We propose, on the basis of recent developments in our understanding and geophysical imaging of crustal magmatic systems, that mining of sub-volcanic metal-bearing brines may be a fruitful avenue for addressing the impending growth in demand for certain metal resources that will arise during the transition to a low-carbon economy. The economic potential of such brines hinges critically on the geophysical challenge of locating them and the technological challenge of extracting them to the surface. Regardless of the economic outcomes, direct drilling into hot, sub-volcanic systems is increasingly feasible technically and will provide invaluable scientific insights into both magmatic and ore-forming processes.

Re: Under the volcano: A source of key metals and geothermal energy
#2
In reply to #1
MNIce

Nautilus Minerals (now bankrupt) had considered direct extraction of metal-bearing liquids from submarine "smoker" vents in the waters of Papua New Guinea (PNG), but rejected the concept out of concern that doing so would completely disrupt the ecosystems constructed around the vents. Instead, they developed tools to extract the solid material around the vents - testing showed metal content could exceed 35% (mostly zinc). This is in contrast to "high-grade" land deposits, which rarely exceed 5% metal; the richer sources having long ago been used up.

(The PNG government is no longer interested in permitting seafloor mining; they fear that extraction of solid seafloor metal deposits would damage other marine resources such as fishing.)