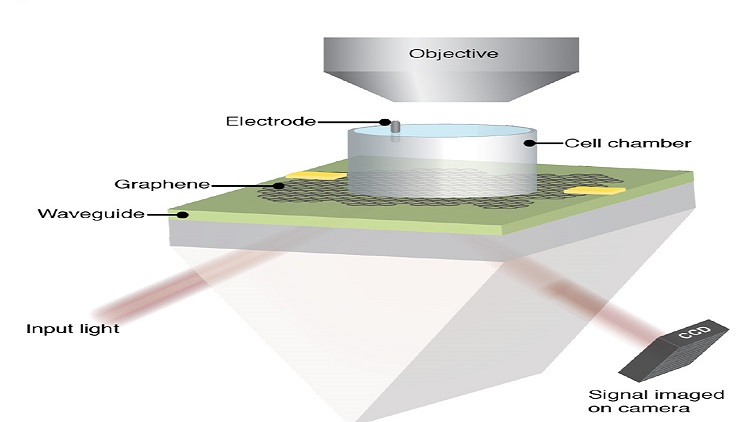 Another biomedical application for graphene, the single atom-thick, 2D sheet of carbon, has been demonstrated. The material was tapped by researchers from the University of California Berkeley and Stanford University as the basis for an advanced sensor that images electrical signals from living cells and tissue in real time.

Graphene has previously proven its utility as a component in a biosensor platform that detects SARS-CoV-2, the virus causing COVID-19, and in a wearable sweat sensor designed to monitor stress levels. Now a graphene sheet can be used to capture the real-time electrical activity of a beating heart by recording an optical image of the electric fields generated by the rhythmic firing of the muscle’s cells.

In designing the critically coupled waveguide-amplified graphene electric field (CAGE) sensor, the researchers expanded on previous studies demonstrating that an electrical field can influence the way a graphene reflects or absorbs light. Initial observations were documented by placing a 1 cm2 of the material on a beating heart from a chicken embryo.

To amplify changes in reflectance signal, a thin waveguide was added below the graphene sheet. This arrangement forced reflected laser light to bounce internally about 100 times before escaping and rendered the change in reflectance detectable by a conventional optical video camera.

The resulting “graphene camera” was used to study cardiac cells in real time, without the need for dyes or electrodes, and produce an optical image of the faint electric fields generated by rhythmic beating.

The CAGE technology detailed in Nano Letters might be used to evaluate the effects of new drugs in cardiac tissue or to monitor electrical activity in the brain.

By posting a comment you confirm that you have read and accept our Posting Rules and Terms of Use.
Advertisement
RELATED ARTICLES
Energy Storage for Flexible Electronic Devices
Team creates a rubbery patch for monitoring heart health
Layering Delivers Graphene to 3D Form
Robust salinity sensor stands up to marine conditions
What are Armchair Graphene Nanoribbons?
Advertisement