Flying taxis promise to open the sky to relieve ground-based traffic congestion. This emerging technology has the potential to significantly disrupt the urban mobility market.

A number of companies are developing flying car technology to gain a foothold in this nascent industry. Most of the air taxis in development feature collections of rotors arranged in various configurations. Jetoptera — an Ohio-based aerospace company — has a unique solution with no spinning propellers. Rather, the firm’s fluidic propulsion system integrates stationary thrusters with no moving components into the airframe.

How does it work? 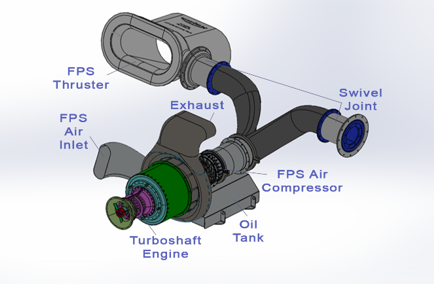 Jetoptera’s Fluidic Propulsion System consists of a source of power — in this case a turboshaft engine — turning an air compressor to produce pressurized air to flow through specially designed thrusters. Source: Jetoptera

Jetoptera’s thrusters increase thrust by manipulating flow. Each thruster amplifies compressed air by augmenting thrust via a kind of fluid induction similar to the principle used in Dyson’s bladeless fan.

In the current design, a turboshaft engine drives an air compressor, which generates high pressure air. This jet of compressed air is spread across the outlet of the thruster. The distributed jet of air interacts with ambient air to increase overall flow over the wings by several times.

The compressed air from the compressor is forced through a narrow outlet distributed around the thruster’s circumference. An aerodynamic mechanism known as the Coanda effect causes the fluid jet to remain attached to the surface of the thruster as it is forced out of the outlet.

The source of power for the fluidic propulsion system is flexible; the gas-powered engine and compressor can be exchanged for an electric compressor powered by batteries or a fuel cell system running on hydrogen. 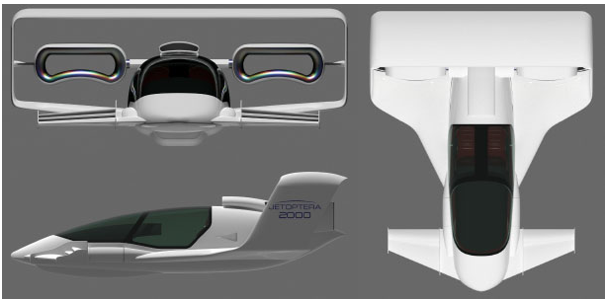 The company has a variety of vehicle designs, including vertical take-off-and-landing (VTOL) models featuring canards and two thrusters arranged within a box-shaped wing as well as short-take-off-and-landing (STOL) configurations with banks of thrusters arrayed in longer wings. The J-2000 VTOL model can carry a payload of 450 lb up to 200 miles at a speed of 200 mph, while the J-9000 STOL aircraft can move 2,000 lb up to 1,200 miles.

Jetoptera utilizes several advanced technologies in its flying aircraft. The company has licensed heat resistant ceramic matrix composites (CMCs) from NASA for use in its aircraft engines and propulsion system components. The silicon carbide-silicon carbide (SiC-SiC) CMCs, developed by NASA’s Glenn Research Center, feature Sylramic-iBN SiC fiber that enables the material to maintain structural stability up to 2700° F, an improved temperature capability of 300° F compared to other CMCs and 500° F compared to metallic materials.

The company’s fluidic propulsion technology is significantly quieter than competing propeller-based designs. Through research funded by the United States Department of Defense (DoD), the noise output of Jetoptera’s propulsors were found to have an Overall Sound Pressure Level (OASPL) of 15 dBA lower than a traditional reciprocating engine-drive propeller propulsion system. The potential for even better noise performance exists with additional noise abatement, such as placing the thrusters inside different enclosures.

Through two contracts Jetoptera recently won from the United States Air Force, the company will further demonstrate its unique propulsion system. The first contract aims to confirm the noise performance advantages by comparing its propulsion technology to similar propulsors within an anechoic wind tunnel. The second contract will investigate the maximum lift that can be generated by a wing-integrated propulsor via aerodynamic mechanisms including boundary layer ingestion and upper surface blowing jets.

Jetoptera is not the only company pursuing flying taxi technology. A large collection of companies is developing a variety of novel designs. Joby Aviation, which has received funding from Toyota, is working on a taxi with six tilting rotors. To circumvent the limitations of battery technologies, Alakai Skai plans to power its air taxis with liquid hydrogen. Lilium’s solution has tilting banks of 36 ducted fans. Many others firms are also developing unique solutions, including Urban Aeronautics, Volocopter, Wisk Aero, Vertical Aerospace, and Jaunt Air Mobility, and large companies like Hyundai, Uber, Boeing and Airbus are investing in the space.

Success, however, is not guaranteed. Several barriers to widespread adoption exist. Current lithium battery technology has limited energy density, placing constraints on the range of electric flying cars. Progress is needed in commercial certification, testing and regulations for this new technology. Advances are also needed in air traffic control to manage large quantities of taxis flying in urban areas. Furthermore, there are safety concerns, particularly at altitudes between 30 and 120 ft, at which height ballistic parachutes are ineffective due to a lack of time to open up.

Despite the challenges, the promise of bypassing urban gridlock by whisking riders through the skies continues to drive investment and development in the emerging technology. The dream of widespread deployment of fleets of flying cars is getting closer to reality.