Hydrogen locomotive to test the rails in California

A hydrogen fuel cell switching locomotive will be developed by GTI and Sierra Northern Railway to support the Hydrogen Fuel Cell Demonstrations in Rail and Marine Applications at Ports (H2RAM) initiative in California. The $4 million locomotive project funded by the California Energy Commission will demonstrate the potential of hydrogen fuel cell technology to reduce transportation air pollutant and greenhouse gas (GHG) emissions.

A tier 0 diesel locomotive will be retired and replaced with a zero-emission switching locomotive equipped with advanced 200 kW hydrogen fuel cells, hydrogen storage, advanced battery and systems control technologies as an alternative to less environmentally friendly diesel-powered systems. The potential California market for new hydrogen locomotives includes more than 260 switcher locomotives and up to 500 intrastate locomotives.

Short-line and switching locomotives account for a significant share of the total locomotive energy use within California as they carry a significant portion of freight in the state and operate on the first and last miles of the national freight network. This makes short-line operations an excellent testbed for the demonstration of zero-emission technologies. Most switcher locomotives in California use an average of 50,000 gallons per year per switcher potentially leading to a reduction of more than 12 million gallons of diesel per year. This is approximately equivalent to the same amount of fuel used each year by 20,000 light-duty vehicles. 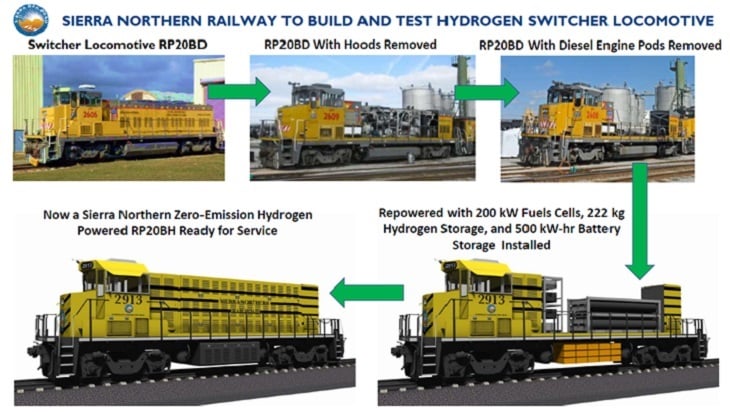 By posting a comment you confirm that you have read and accept our Posting Rules and Terms of Use.
Advertisement
RELATED ARTICLES
BNSF to Test Battery-Electric Locomotive
Trains to locomote with hydrogen fuel cells
Ask the Expert: Oil Analysis for Railroad Fleets
Hydrogen is powering transportation everywhere
Watch a trial run of China’s new hydrogen fuel cell locomotive
Advertisement