A cross-disciplinary research team is developing a biological cement called BioZEment to offset the excessive amount of global greenhouse gas (GHG) emissions that result from the conventional production of cement.

“The manufacture of cement, which is a binding agent in concrete, alone accounts for more than five percent of global greenhouse gas emissions," said SINTEF researcher Simone Balzer Le.

Typically, cement is produced by heating limestone to 1450° C in a process called calcination. This results in the release of huge volumes of CO2, a GHG that enters the atmosphere through burning fossil fuels and certain chemical reactions. 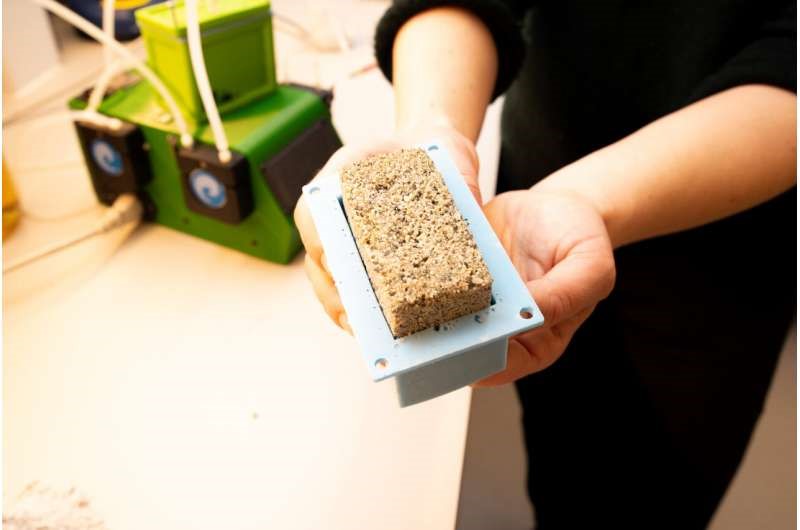 "There are currently many ways of reducing these volumes," said Balzer Le. "Our options include capturing the CO2 gas, partially substituting the cement with another binding agent, or finding a way of making cement without heating. This is the approach we are using in the development of BioZEment."

The success of the team’s approach could greatly influence the reduction of GHG emissions in the building sector.

Although BioZEment is not currently suitable for all building applications, the team estimates its use could reduce global emissions by as much as 80% compared with conventional cement. This would contribute greatly to the construction sector’s collective efforts to reduce CO2 emissions, according to the team.

The key to the new production method is replacing heat with bacteria. The process begins with the conventional practice of mixing ground limestone particles and sand. Then, specific bacteria are added, in this case bacteria the researches found close to a limestone quarry in Verdal, Norway.

"The bacteria produce organic acids, including lactic and acetic acid. These help to reduce the pH value of the mixture and so partially dissolve the limestone, releasing calcium ions and carbonate," said Balzer Le.

In the second step, she explained, sand is mixed with another form of bacteria in a mold and fed with the prepared mixture of partially dissolved limestone and urea. “These bacteria produce an enzyme that splits the urea, which causes the pH to increase again. Under such conditions, calcium is formed together with calcium carbonate crystals, and it is these crystals that act as the binding agent in bacteria-based concrete."

Once the material in the mold dries, it becomes solid. The method is based on the biogeochemical process known as microbially induced calcite precipitation (MICP), in which calcium carbonate precipitates as a result of the interaction between natural minerals and bacterial metabolism.

"The advantage of our approach is that both the calcium and the carbonate are derived from the limestone, which enables us to reduce the use of urea compared with another commonly applied form of MICP that obtains its carbonate solely from urea," said Balzer Le.

The researchers determined the best approach for applying this technology is to manufacture bacteria-based bricks, at a cost they estimate will be about 10% higher than standard bricks. The bricks will enable the team to develop the process and will also accommodate commercial applications. Balzer Le envisions commercially manufacturing bricks that can be transported directly from a factory to a construction site.

BioZEment is not currently as strong as conventional concrete, Balzer Le acknowledged, but its material strength is “more than adequate” for some applications. She added that there are a number of potential ways to increase the strength of BioZEment concretes, such as reinforcement using aluminum or cellulose fibers from timber.

BioZEment is potentially recyclable, which would result in fewer raw materials being used.