The role of automation in automotive manufacturing 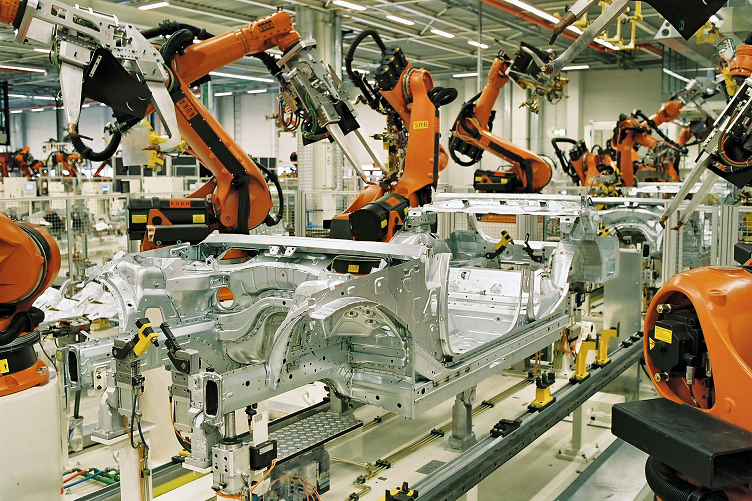 The legend states that Henry Ford watched an assembly line at a meatpacking plant and decided he could implement it in his own automobile manufacturing plants. The assembly line was more efficient than having to build each car one piece at a time, and Ford Motor Company reaped the benefits. In Henry Ford’s day, teams of workers would install each part as the line moved forward, with a new car rolling off the end of the assembly line at the same time a new frame pushed onto the starting end.

Flash forward to modern times. Henry Ford’s automotive assembly line is alive and well, but instead of a team of workers, robots conduct large sections of the assembly. While some may lament the loss of jobs, others point out the benefits of automation. For starters, the robots do not get tired or slow down, and rarely make a mistake. Some tasks, such as removing parts from a heat-treating oven, spot-welding, testing onboard electronics, and so on, are ideal candidates for automation, as they are dangerous or require a high degree of precision that the robots can offer. Robots are already used in the automotive industry for material removal, welding, assembly, machine tending and part transfer tasks.

As a whole, robots have reduced workplace injuries. Rather than having an employee lift a heavy wheel and tire to mount it on the axle many times over an 8 to 12 hour shift, a robot with a hydraulic arm can perform this task. This reduces the stress, strain and repetitive motion injuries that have plagued all manufacturing industries. Even with the increase in automation, there were 9.9 million jobs in the automotive manufacturing industry in 2019. 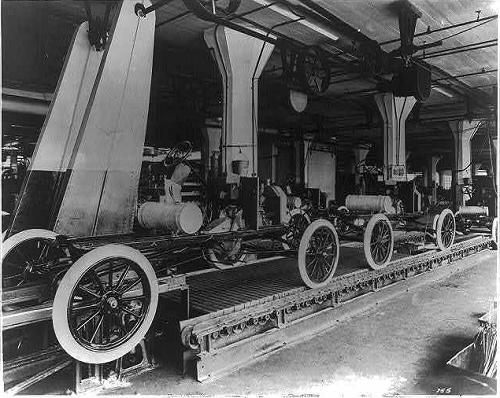 Model T’s at Ford’s Highland Park plant in 1913. Source: PicrylWith the rise in automation, and the reduction in cost for sensors and control networks, one must ask, “What does the future hold for the automotive manufacturing industry?” Some day, there may be a fully automated plant that is run entirely remotely, using Just-In-Time (JIT) manufacturing techniques. Such a plant could anticipate demand or custom-order vehicles from the dealer (or the individual) and have them rolling off the assembly line with little human interaction. This is a ways off, but there are a lot of intermediate, incremental improvements that will improve the throughput and efficiency of the process. Three such areas of improvement will be increasing energy efficiency, increasing throughput and improving worker safety, as for years to come, there will be workers in the manufacturing plant.

Energy efficiency is improving in the automotive manufacturing industry through various smart devices. In the early days of the industrial revolution, all machine tools were attached to a belt or chain drive, coming from the flywheel of a steam engine. Through a set of different-sized pulleys, speeds could be adjusted, or by removing the belt entirely, the tool could be shut off. Now, advanced control algorithms can detect when a specific robot will be needed and boot it up in advance. Instead of having a machine sitting idle, it can be turned on and off as needed.

Furthermore, these systems provide health monitoring and feedback. If a cutting blade is heating up, taking a longer amount of time to cut, or is causing a higher current draw on the motor, the control system can flag this machine for preventive maintenance. This is a much more efficient system than either waiting for a machine to break down, or scheduling periodic preventive maintenance, where potentially good parts are replaced just because “it is time” to perform the maintenance. Consider a car that lets the driver know that the oil is getting dirty versus throwing away relatively clean oil every 3,000 miles or three months.

Throughput and quality control are increasing due to the rise of inexpensive sensors. Probably one of the largest breakthroughs in this area has been increases in machine vision technology. Modern machine vision systems can determine whether screws have been tightened properly, can look through the clear coat and make sure it has been applied evenly, can use polarized light to determine stresses in windows and mirrors, and a variety of other quality control tasks that human beings are simply not equipped to perform.

The vehicles themselves are equipped with so many more sensors that troubleshooting them has become a task for computers as well. In the early days of automotive manufacturing, a car might have cleared the assembly line and not start. If its paperwork record showed no major faults, it was up to a team of mechanics to diagnose and rework the car. If the car did not start, the mechanics would check fuel, air, spark and compression to find the problem. While they still perform these tasks, they have more tools available. They can check some of the sensor outputs to find that the fuel-air mixture is incorrect, or that the fuel pump pressure is low. This reduces the chances of a “lemon” leaving the factory. 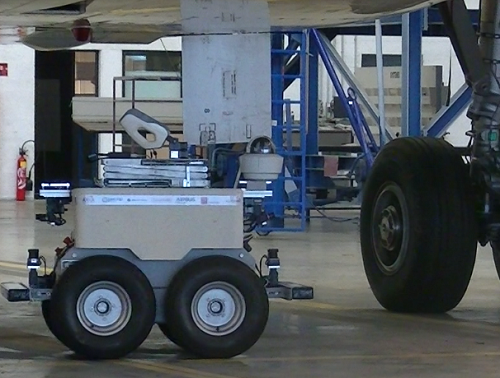 Cobot used in an airport to autonomously deliver heavy items. Source: AirbusWorker safety will be constantly improving through the widespread use of sensors. In the early days of automation, light curtains were placed to separate workers and robots. If a worker stepped through the light curtain, the robot would go into an emergency shutoff mode to protect the worker. However, on the near horizon is the concept of collaborative robots (cobots) that are designed to operate in the same space as workers, lending a helping hand when necessary.

For example, a cobot may retrieve and hold a heavy part in place, while a worker fastens it down. The cobot bears the weight and aligns it properly, while the worker finishes some detail work.

Machine vision also benefits worker safety in a number of ways. Infrared cameras can be used to check motors and bearings to make sure they are not overheating, to look for electrical wires that are drawing too much current and to check employees for fevers or signs of heat-related stress. For example, if a bearing on an assembly line is showing an unusual amount of heat, the infrared camera can send a signal to the control operator to service that bearing, or perhaps divert the products to another assembly line for maintenance. If it detects a hot spot in the wiring, the control system can reroute workflow through one robot over another, to reduce the load on the overheated one.

Much has changed since the days of Henry Ford, but the basic assembly line shows no signs of fading into history. It will be staffed by an increasing number of cobots, working with humans, as well as autonomous robots, as their technology improves. While it may be a long time before a fully automated, JIT automobile plant goes online, there are many steps along the way that show promise for improving cost and energy efficiency, as well as reducing workplace injuries.

By posting a comment you confirm that you have read and accept our Posting Rules and Terms of Use.
Advertisement
RELATED ARTICLES
Collaborative Robotics Driving Manufacturing Productivity Gains
MES Rises as Automakers Embrace Flexibility
Design for joining and assembly: Part 2
Exoskeletons in manufacturing: Part 2
Mind-reading robot promises to improve assembly line productivity
Advertisement