According to developers, the sensor uses surface-enhanced Raman scattering technology to enhance the Raman signal of chemical substances, including narcotics, by 1010 and even more. 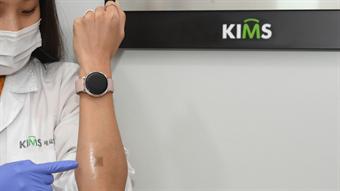 To develop the wearable optical sensor, researchers extracted a silk fibroin protein from a silkwood cocoon to create a 160 nm thick film, which was then coated with 250 nm thick silver nanowire and attached to a medical-grade patch.

Adhered to the skin, the patch absorbs sweat and the drug substance within the wearer’s sweat penetrates the sensor, reaching the silver nanowire. The patch is then irradiated via the Raman laser, revealing the presence of the drug.

According to the developers of the patch, this process can be done in approximately one minute — much quicker than traditional drug testing approaches such as blood and urine testing wherein biological specimens are tested in a lab setting.

Additionally, the sweat patch testing reportedly avoids the ethical issues that potentially arise from conducting drug testing via urine samples where subjects are observed as they provide samples.

The research appears in the journal ACS Applied Materials and Interfaces.

Would it be admissible?

Re: Wearable sensor rapidly detects illegal drugs in the wearer's sweat
#2
In reply to #1
JRiversW

One would think it could be after significant testing to prove reliability and if properly administered regarding probable cause and such.

However the US DOJ during the final weeks of the previous administration released a guidance memo in support of junk science forensics that are known to be unreliable but have led to convictions so reliability and efficacy might not matter.

The kind of thing the V.P. would have done when she was prosecutor.

If that invention become a must in all sports, then there will be no more new olympic and world records any more!

I am eager to see future-generation applications of this product. Can it detect medical abnormalities/imbalances? Could this be the start of the end of needle blood tests.