The world's first high-performance gyroscope for operating in severe environments, such as industrial and aeronautic equipment and automobiles, has been designed by researchers from CEA-Leti in France and Politecnico di Milano, Italy. The development confirms prospects for detecting minute rotational movement even among system vibrations.

Low-power micro-electromechanical system (MEMS) gyroscopes are used in multiple fields because of their small footprint and low power consumption. They can monitor and control device position, orientation, direction, angular motion and rotation. Their integration into automobiles improves vehicle stability through an electronic stability-control system. They also can be used for dead reckoning — the 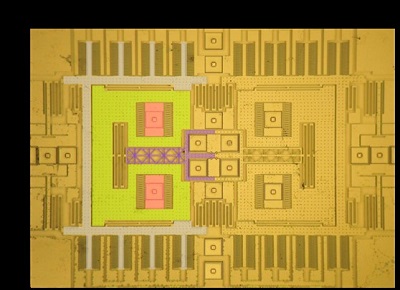 Optical microscope picture of the 50 kHz gyroscope; colored areas detail the detection elements. Source: CEA-Letidetermination of a car, ship or aircraft position without the aid of celestial observations — in driverless cars. Their integration into smartphones allows detection of unit rotation and twist (gesture-recognition functions), indoor navigation when GPS is disabled and mixed reality, among other functions.

The devices operate at a given resonant frequency and parasitic mechanical vibrations rarely exceed 40 kHz. But today, there is no high-performance MEMS gyroscope with a resonant frequency greater than 20 kHz, above the frequency band of parasitic vibrations. When this frequency is close to that of the vibrations of the environment, mechanical disturbances can distort the measurements. The researchers overcame this distortion by developing a nanoelectromechanical system (NEMS)-based gyroscope that operates at frequencies in the order of 50 kHz, which is more than two times higher than the capability of conventional MEMS gyroscopes and beyond the frequencies of vibrations common even in severe automotive, industrial and aeronautic settings.

Fabrication of the yaw gyroscope with modes around 50 kHz and a 1.5-mm2 footprint is compatible with processes of most MEMS foundries. Their production is based on a MEMS/NEMS technological platform that, depending on needs, allows the gyroscopes to be co-integrated with a three-axis accelerometer or a high-performance pressure sensor, on a single chip.

By posting a comment you confirm that you have read and accept our Posting Rules and Terms of Use.
Advertisement
RELATED ARTICLES
Light-powered Gyroscope Could Offer Precision at a Reduced Weight
Wireless Vibration Data Logger with Improved Anti-Aliasing Filter and Noise Floor
Device can detect avocado ripeness through vibrations
Are We There Yet? Innovations That Led to Navigational Certainty
Methods to reduce DC-DC converter output ripple
Advertisement