The processes outlined in Part 1 and Part 2 of this series come from an application where the wastewater stream is rather small, and primarily consists of reject streams from water purification of the makeup to the steam generators. The organic impurities that can potentially infiltrate return condensate will be removed by internal processes such as flash drums and deaerators.

As a result, this article would be lean if it discussed wastewater treatment for that particular application. However, many plants are faced with the scenario of having to treat a number of wastewater streams that may include any or all of the following:

Thus, treatment of multiple streams can lead to some complex scenarios. Common in many cases is to route as many streams as possible to the cooling tower basin, and then treat the tower blowdown. Beyond this complexity though are the complications that may arise if the plant is required to be a zero liquid discharge (ZLD) facility. The next sections examine some general details on handling these wastewater streams for discharge, or ZLD, if necessary.

Unit processes such as clarification and multi-media or micro-filtration produce a discharge that contains significant quantities of suspended solids. Discharging these streams into a cooling tower basin invites trouble, as the solids can accumulate within the system and cause fouling. The common treatment is suspended solids-laden streams in a mechanical filter press that produces a solid cake, which can then be landfilled. 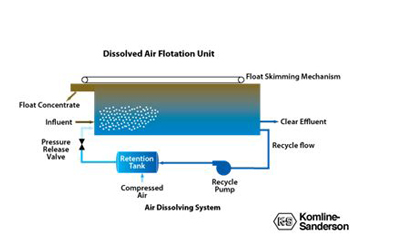 DAF general schematic. Source: www.komline.com.Depending on the type of plant, some wastewaters contain oily matter. Typically, these streams are processed in an oil/water separator to remove the majority of the oil. The oil can then be moved off site to a disposal facility. Skimming, dissolved air flotation (DAF) and induced air flotation (IAF) are common methods for oil removal. In the air flotation systems, bubbles of air are dispersed into the liquid at one end of the treatment vessel. The bubbles attach to oil particles and float them to the surface for removal.

It is common to combine individual wastewater streams, including the clean water from filtration and oil removal processes, in the cooling tower basin.

In some cases, a plant may be allowed to send cooling tower blowdown to a local municipal wastewater treatment plant, provided that the blowdown does not contain excessive concentrations of harmful impurities such as heavy metals. Sometimes, discharge to a surface supply is allowed, although regulations are becoming more complex around the United States. A noteworthy aspect is that individual states can issue discharge permits as long as they are as stringent as national guidelines. Increasingly, I see discharge permits that include constituents that were formerly unregulated. Depending on the regulating authority and location, these “new” constituents may include ammonia, bromide, chloride, nitrate/nitrite, phosphorus, sulfate, total dissolved solids, copper and other heavy metals. The U.S. Environmental Protection Agency is planning to tighten regulations on chromium and zinc discharge.

Also on the rise are facilities that must be ZLD, although this term has various meanings. At plants in arid regions of the country, evaporation ponds may serve the purpose. However, these ponds must be permitted and installed in a proper manner. Lined ponds are de rigueur in today’s environmental climate. Similarly, some plants have been allowed to discharge wastewater by deep well injection. Again, permitting is a big issue and often is not allowed.

Another issue with deep well injection is the temperature increase as the water travels to the injection site, typically several thousand feet deep. The higher temperatures can cause scale formation of reversely-soluble compounds, which will close off the injection wells.

If none of the above options is available, mechanical-thermal evaporation of the waste stream may be the only choice. Accurate determination of influent water chemistry is vital for design and selection of systems such as hardness, alkalinity and silica can cause severe scaling problems in evaporator/crystallizers. At one site I visited, the cooling tower blowdown was first treated in a softening clarifier to reduce hardness. This stream then was processed in a brine concentrator/crystallizer. The primary constituent of the solids produced by the system is sodium sulfate, which forms sloppy deposits but not hard scale. For other crystallizers, crystal seeding was used. A common seed crystal is gypsum, which provides a more thermodynamically stable site than metal surfaces for precipitation of such minerals as calcium sulfate and silicates.

Energy requirements for conventional evaporators are quite large. In large measure, this is due to the fact that during evaporation the dissolved solids concentration increases, which then increases the boiling point. The boiling point rise requires additional energy. A modification to the process that has been successfully applied in the salt production industry is evaporation-crystallization with a mechanical vacuum applied to the evaporation chamber. This greatly lowers the temperature at which the liquid boils, and helps to overcome the boiling point rise that occurs in conventional units as the dissolved solids concentration increases. Considerable energy savings appear possible with the vacuum systems.

Becoming popular are treatment methods to reduce the volume of the plant waste stream before final treatment. One notable technology is high-

Keys to the process are:

Under proper conditions, a 90% RO recovery rate may be achievable. The RO permeate recycles to the plant high-purity makeup water system or other locations. However, while the process appears straightforward, a number of lessons have emerged regarding this technology in actual application. The following lessons are taken from a system operating at a power plant near the Pacific Northwest.

One of the most notable examples for any of these systems is that some standard water treatment chemicals may foul the UF membranes. Operating experience indicates that the membrane manufacturer and type greatly influence this phenomenon. Fouling occurs because membranes typically carry a negative surface charge while often cationic polymers are used for coagulation or flocculation. Residual cationic polymer is strongly attracted to the membranes. Also, operators must be careful of external membrane fouling during chemically-enhanced backwash cleanings. Furthermore, the membrane style and manufacturer can play a big part in successful operation.

By posting a comment you confirm that you have read and accept our Posting Rules and Terms of Use.
Advertisement
RELATED ARTICLES
Fundamentals of Cooling Tower Heat Transfer – Part 1
Water from oil and gas fields may solve a blowdown challenge
Steps to Correctly Select Water Treatment Systems
Lithium Recovery from Oil Brine
Addressing treatment challenges for industrial water effluent
Advertisement