In a bid to improve the competitiveness of U.S. manufacturing, the Advanced Robotics for Manufacturing (ARM) Institute has developed a robotic solution for sewing and textiles handling.

Participants from Siemens Technology (PI), Bluewater Defense, Sewbo Inc and the University of California at Berkeley have devised a new robotic system for handling and assembling garments as part of a project for the ARM Institute, which is a national consortium dedicated to demonstrating U.S. leadership in manufacturing via robotics and workforce innovation. 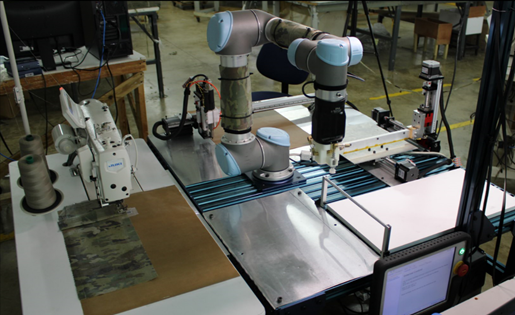 In addition to developing a robotic operating system (ROS) that controls conventional sewing machines, the team developed a method that would allow for the automation of sewing — a task that has traditionally been carried out exclusively by manual labor due to the difficulty for robotic handling of limp textiles.

To enable industrial robots to take over garment sewing applications, fabrics to be sewn and handled were laminated with a water-soluble thermoplastic polymer that stiffens the fabric.

The team demonstrated that the treated fabric could be autonomously assembled via the robotic sewing of pocket flaps for military uniform pants via the ROS.

By posting a comment you confirm that you have read and accept our Posting Rules and Terms of Use.
Advertisement
RELATED ARTICLES
RPI robots to build overflow structures for healthcare facilities
"Smart" Clothes One Step Closer to Reality
A New Twist on Artificial Muscles
Surgical Robot Operates as an Efficient Sewing Machine
ARM: Increasing U.S. Robotics Competitiveness
Advertisement