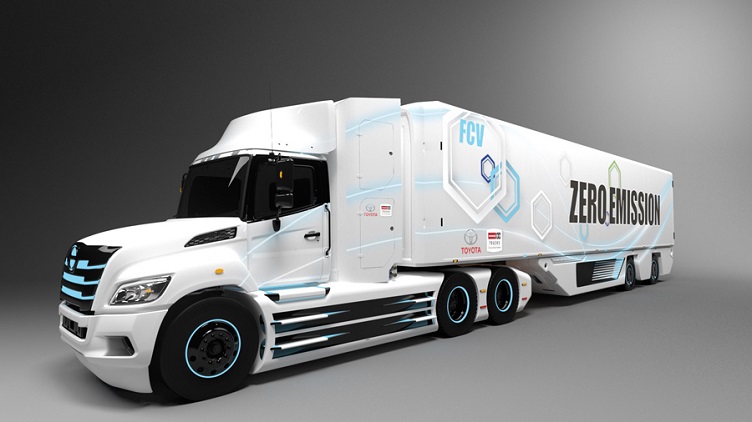 The joint project will use Hino’s HXL series powertrain and Toyota’s fuel cell technology to create a heavy-duty electric truck that features extended range, zero emissions and will be commercially viable for a fleet of vehicles.

The collaboration expands a previous effort between both companies to develop a 25 ton FCET for the Japanese market that was announced earlier this year.

"A fuel cell powered version of the Hino XL Series is a win-win for both customers and the community. It will be quiet, smooth and powerful while emitting nothing but water," said Tak Yokoo, senior executive engineer at Toyota Research and Development.

Hydrogen fuel cells work like batteries, but they do not run down or need recharging. Fuel cells produce electricity and heat if fuel is supplied. The fuel cell consists of two electrode — negative and positive — placed around an electrolyte. Hydrogen is fed to the anode and air is fed to the cathode, causing a catalyst at the anode that separates the hydrogen molecules into protons and electrons. The electrons go through an external circuit, creating electricity and the protons migrate through the electrolyte to the cathode where it joins with oxygen and the electronics to produce water and heat.

Toyota has been ramping up its development of hydrogen-based fuel cell vehicles this year recently with new truck-based mobile charging stations to deliver power and other needs to areas that have been struck by a natural disaster. Additionally, Toyota and Denyo are partnering to jointly develop a fuel cell vehicle that could be used as a power supply for entertainment venues such as outdoor concerts or events as well as generate power during natural disasters, replacing diesel engines that do this work currently.

By posting a comment you confirm that you have read and accept our Posting Rules and Terms of Use.
Advertisement
RELATED ARTICLES
Denyo and Toyota to develop fuel cell vehicle to help during natural disasters
Toyota and Hino to develop heavy-duty fuel cell truck
Hydrogen is powering transportation everywhere
Toyota develops fuel cell system for maritime applications
7-Eleven Japan and Toyota Agree to Work on Hydrogen Concepts
Advertisement